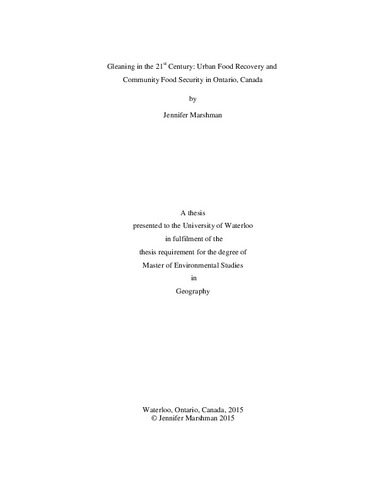 Gleaning used to be an activity of the impoverished who would glean food from farms for their families. Now, formalized gleaning, which is harvesting food from where it is grown that would otherwise go to waste, is most often undertaken by volunteers whose motivations have been little explored. Groups organizing food recovery activities depend almost entirely on volunteers to do the work in a multitude of contexts such as through urban fruit tree projects. Why do people volunteer their time to make these initiatives successful, and how do volunteers perceive that modern gleaning initiatives contribute to community food security? These questions are explored through five case studies of Ontario gleaning groups, which entailed 16 semi-structured interviews and an online survey with 14 volunteers, group leaders and urban farmers. A primarily inductive, interpretivist, approach was taken for the analysis of the interview and survey data. The top three motivators that were identified align well with the top foci found on organizational websites. They were concerns about food waste, community building and support, and free food. There was a range of additional motivators including various aspects of social engagement, spirituality, and alternative seeking. Several problematic issues that are present in these initiatives are discussed, including scale (pounds harvested), the issue of giving away ‘premium products’, and supporting emergency food providers through donations. Pounds harvested, when viewed in isolation, seems insignificant in light of the hundreds of thousands of people that access food assistance programs in Ontario. With that said, improving access to fresh, local foods can benefit many people, and in ways that go beyond pounds harvested such as connecting community members, contributing to a healthful diet, and connecting people to their food. With respect to volunteers’ perceptions about how modern gleaning contributes to community food security—understood as ensuring access to food through non-emergency sources—volunteers acknowledged the implicit contradiction that the food was being made available through emergency food providers. Nonetheless, many food recovery volunteers feel that these initiatives contributed positively to community food security. This study fills an important gap in knowledge regarding food recovery through gleaning and demonstrates that several of the seemingly contradictory issues can be mitigated to some degree by the positive contributions that these groups make towards achieving community food security.