Urban Agriculture as an Agent for Social Change in London, Ontario 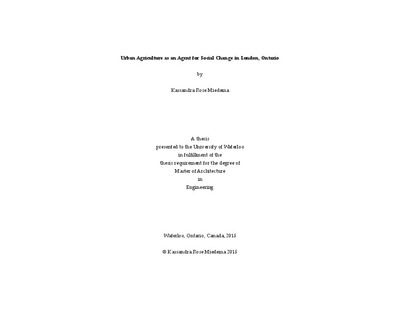 London, Ontario was once closely tied to its local food production and distribution. Since 1835, this close connection with food was facilitated by places like the Covent Garden Market. London and many other cities were affected by technological advancements primarily in transportation that created the rift between producer and consumer in its food network, causing the processes and systems of food to become invisible. The goal of the thesis is to offer the residents of the Hamilton Road neighbourhood in London, Ontario an affordable alternative to their commercial food system. Urban agriculture is also the lens through which broader themes such as inter-disciplinary urban design, biophilia, social equality, and socio-environmentalism are analyzed. The exploratory research and analysis evaluates the food system currently in place in London, and more specifically the Hamilton Road neighbourhood. The thesis outlines the advantages of the inherent strengths and proposes interventions to address the weaknesses of London’s food system. The final design proposes to use an integrated systems approach at a city-wide and then a neighbourhood scale to re-imagine the food system as a part of a larger urban network. A strategy for the implementation of urban agriculture in an existing urban setting at the scale of the neighbourhood is the proposal of this thesis. Hamilton Road is the chosen neighbourhood for implementation because it displays the ideal social conditions for promoting the uptake of an urban agricultural movement. By creating healthy, socially inclusive public spaces and private spaces that reconnect people to nature—to heal the gap between producer and consumer within the food network—the project seeks to improve the quality of life by improving food consciousness in London, Ontario.