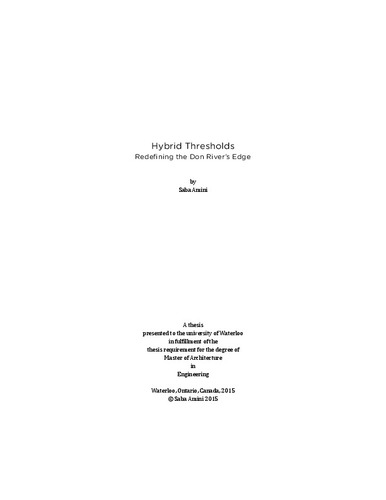 My proposal envisions the threshold between the built urban fabric and the natural environment at the water’s edge. It focuses on the development of public space at the water’s edge, and tries to transform that space into a new interface that can be experienced as a valued and essential part of urban life. Rather than subscribing to the conventional understanding of infrastructure as a service-based utility, this thesis intends to weave infrastructure and public works at this threshold. It addresses the question of how might urban groundwater filtration, normally considered a toxic function requiring separation from the public, be integrated within low-density public recreation areas involving full immersion and exposure to the environment. Specifically looking at the Lower Don River, this thesis offers a new vision for this area and is compatible with the new generation of thinking about how landscape can not only restore natural area but also be visibly productive and socially accessible. The proposal’s interest in doing so aligns with the ideas of architects and landscape architects such as Michael Hough, Mohsen Mostafavi, Elizabeth Mossop, Pierre Belanger, and Douglas Farr. The design proposal tackles existing environmental and ecological issues of the Don River by envisioning a series of three programs along the Don that offer dynamic community interactions, and foster the discourse on social and environmental responsibilities. These three programs are all defined by the same design strategy, which relies on a hierarchy of water systems with different volumes to develop a corresponding architectural program. The water is absorbed, retained, and purified through different basins, water remediation cells, and soft landforms during its journey to the river, while people have the opportunity to enjoy that process within the system of boardwalks, elevated decks, and seasonally accessible walkways. These habitable landforms provide room for different public recreational activities which could foster a unique character and renewed experience of a public work along the water’s edge.