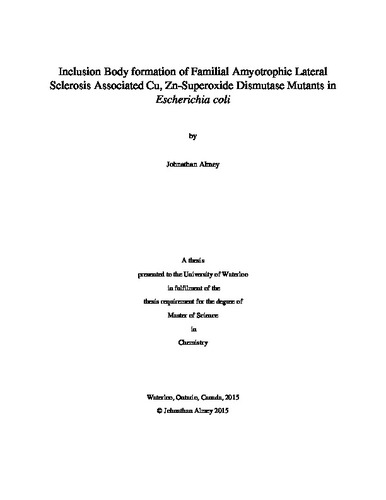 Protein aggregation is a common occurrence when overexpressing protein in bacteria, it is also a hallmark of some neurodegenerative diseases such as amyotrophic lateral sclerosis (ALS). Mutations in the enzyme Cu, Zn- superoxide dismutase (SOD1) have been implicated in causing the familial form of ALS. Here, a number of SOD1 mutants expressed in E.coli are analysed for their propensities to aggregate in the form of inclusion bodies. The inclusion bodies are also analysed for their metal content of both Cu and Zn. The latter experiments were conducted both by a spectrophotometric assay using the metallochromic chelator 4-pyridylazo-resorcinol and inductively coupled plasma atomic emission spectroscopy. The SOD1 variants showed a large amount of variability in their propensities to aggregate and when compared to other physiochemical properties such as the thermal stability, there were clear trends, in particular between the aggregation propensity and the thermal stability of the reduced apo SOD1. In comparing the aggregation propensity to one aspect of the ALS phenotype, disease duration, there was no correlation. The metalation status of the SOD1 mutant inclusion bodies was found to be variable, even within repeated experiments with the same mutant. As metals are required for the enzymes activity, the metals present support the possibility that the inclusion bodies may retain activity. This may prove useful in the future if there is ever a need for an insoluble superoxide catalyst. The results of these experiments also further our understanding of SOD1 aggregation and metalation which may help future investigations in understanding ALS pathology.