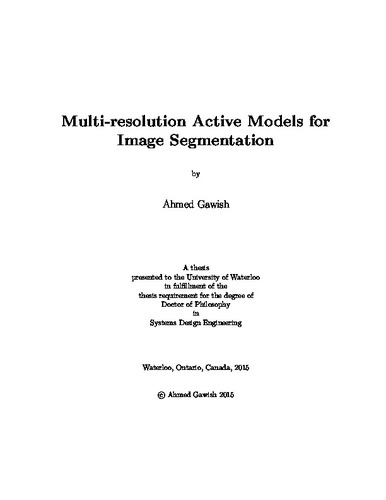 Image segmentation refers to the process of subdividing an image into a set of non-overlapping regions. Image segmentation is a critical and essential step to almost all higher level image processing and pattern recognition approaches, where a good segmentation relieves higher level applications from considering irrelevant and noise data in the image. Image segmentation is also considered as the most challenging image processing step due to several reasons including spatial discontinuity of the region of interest and the absence of a universally accepted criteria for image segmentation. Among the huge number of segmentation approaches, active contour models or simply snakes receive a great attention in the literature. Where the contour/boundary of the region of interest is defined as the set of pixels at which the active contour reaches its equilibrium state. In general, two forces control the movement of the snake inside the image, internal force that prevents the snake from stretching and bending and external force that pulls the snake towards the desired object boundaries. One main limitation of active contour models is their sensitivity to image noise. Specifically, noise sensitivity leads the active contour to fail to properly converge, getting caught on spurious image features, preventing the iterative solver from taking large steps towards the final contour. Additionally, active contour initialization forms another type of limitation. Where, especially in noisy images, the active contour needs to be initialized relatively close to the object of interest, otherwise the active contour will be pulled by other non-real/spurious image features. This dissertation, aiming to improve the active model-based segmentation, introduces two models for building up the external force of the active contour. The first model builds up a scale-based-weighted gradient map from all resolutions of the undecimated wavelet transform, with preference given to coarse gradients over fine gradients. The undecimated wavelet transform, due to its near shift-invariance and the absence of down-sampling properties, produces well-localized gradient maps at all resolutions of the transform. Hence, the proposed final weighted gradient map is able to better drive the snake towards its final equilibrium state. Unlike other multiscale active contour algorithms that define a snake at each level of the hierarchy, our model defines a single snake with the external force field is simultaneously built based on gradient maps from all scales. The second model proposes the incorporation of the directional information, revealed by the dual tree complex wavelet transform (DT CWT), into the external force field of the active contour. At each resolution of the transform, a steerable set of convolution kernels is created and used for external force generation. In the proposed model, the size and the orientation of the kernels depend on the scale of the DT CWT and the local orientation statistics of each pixel. Experimental results using nature, synthetic and Optical Coherent Tomography (OCT) images reflect the superiority of the proposed models over the classical and the state-of-the-art models.