Standard model physics and beyond from non-commutative geometry. 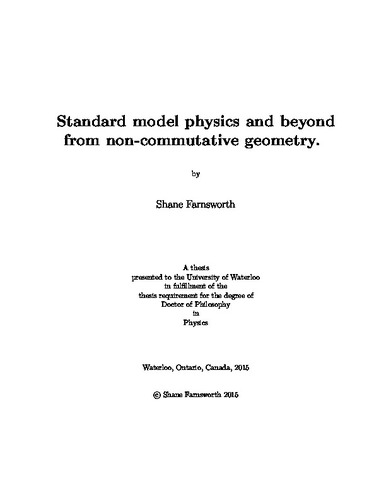 Non-commutative differential geometry (NCG) extends Riemannian geometry and yields a striking reinterpretation of the standard model of particle physics (SM) as gravity on a `non-commutative' manifold. The basic idea behind NCG is to shift focus away from topological spaces and manifolds, to instead focus on the algebra of functions defined over them (``the algebra of coordinates"). This simple idea allows one to explore geometries where one has only the algebra and there is no classical notion of the underlying space whatsoever. In particular, this idea extends to the case in which the input algebra is non-commutative. In this thesis we go a step further: we propose a simple reformulation of the input data corresponding to NCG, which naturally extends to describe geometries which may also be non-associative. The content of our reformulation is as follows: In the traditional approach to NCG, one replaces the usual geometric data of manifolds and metrics {M,g} with `spectral' data held in so called `spectral triples' T = {A,H,D}, consisting of an input algebra A, and a Dirac operator D represented on a Hilbert space H. We show that the data held in a spectral triple may be `fused' together into a larger `fused' algebra B. In this way the various elements of NCG are unified together into a single more fundamental object, while their seemingly unrelated geometric axioms and conditions are re-expressed simply and naturally as the intrinsic properties of ΩB. This approach naturally extends to describe non-associative spaces in the sense that ΩB need not be associative. When ΩB has more general associativity properties, then appropriate generalizations of the associative NCG axioms derive readily from the intrinsic properties of ΩB, allowing for the construction of a wide range of non-associative geometries which we showcase in this work. While our formulation naturally extends to describe non-associative NCG, it also elucidates many aspects of the associative formalism. We show that asking for ΩB to be associative imposes new constraints beyond those traditionally imposed by the NCG axioms. These new constraints resolve a long-standing problem plaguing the NCG construction of the SM, by precisely eliminating from the action a collection of 7 unwanted terms that previously had to be removed by an extra, non-geometric, assumption. We also explain how this same reformulation yields a new perspective on the symmetries of a NCG, which arise simply and naturally as the automorphisms of ΩB. Applying this perspective to the NCG traditionally used to describe the SM we find, instead, an extension of the SM by an extra U(1) B-L gauge symmetry, and a single extra complex scalar field σ, which is a singlet under the SM gauge group, but has B-L=2. The σ field has cosmological implications, and offers a similar solution to the discrepancy between the observed Higgs mass and the NCG prediction as that proposed elsewhere in the literature.