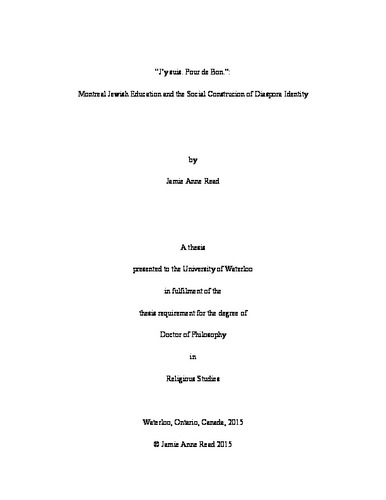 This work examines the meaning of the State of Israel in diaspora Jewish education in contemporary Montreal, Canada. It does so by asking three central questions: “Is there a common idea of the nation?” “How is the idea of the nation made compelling and transferred from one generation to the next in a diaspora context?” and “Does the local context of a given diaspora community affect how the idea of the nation is taught?” The first part of this study draws on Anthony Smith’s theory of ethnosymbolism to investigate how symbols and myths provide the cultural foundations necessary for the social construction of modern national consciousness. Particularly, it reveals the process through which the political myth of the State of Israel expanded on pre-modern religious narrative frameworks in order to elicit communal will and emotion and unify highly divergent Jewish communities around the idea of the nation. Taking Montreal Jewish day schools as a site of inquiry, the second dimension of this research analyzes how the process of nation building occurs in a diaspora setting. It investigates how specific elements common to nations - the myth of election, territorialisation, shared ethnohistory, and communal destiny - are interwoven and actively cultivated in Israel education curricula and programming developed for mainstream Montreal Jewish day schools. This case study reveals how the absence of territorialisation creates certain challenges when cultivating diaspora nationalism and highlights how Montreal Jewish educators systematically attempt to overcome those challenges. A final aspect of this work develops the idea that Jewish education is influenced by local social forces and that attachment to a national homeland increases when a diaspora community experiences social isolation. Specifically, it argues that fostering a common idea about the State of Israel in mainstream Montreal Jewish education is made possible due to the near institutional completeness of the Montreal Jewish community; isolation from other local communities, namely the francophone community of Quebec; intensive Hebrew language and Jewish Studies curricula; and the placement of Israeli teachers in Jewish day schools. This study offers new insight into the affects of the socio-linguistic and local context on the process of diaspora identity formation in Jewish day schools. Equally, by emphasizing the foundational role religion holds in the social construction of national identity, this dissertation reveals how religion and nationalism can reinforce national cohesion in a diaspora context.