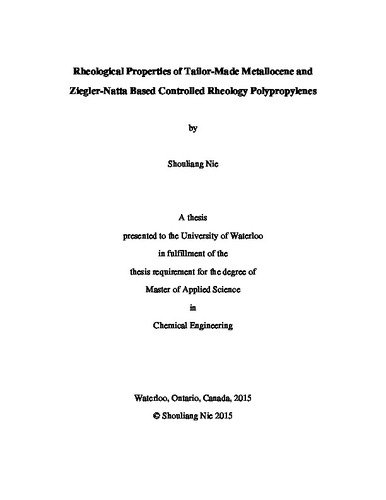 Controlled rheology polypropylenes (CRPP) have been produced industrially by peroxide induced degradation in post-polymerization reactive extrusion (REX) operations. This has been well developed for commodity Ziegler-Natta based polypropylene (ZN-PP) resins, resulting in materials with controlled rheological properties with accompanying narrower molecular weight distribution (MWD). In this work, this methodology has been tested on both metallocene based polypropylenes (mPP), which have a narrow MWD initially, and ZN-PP resins at various peroxide concentrations. The differences in their degradation process as well as the properties of the resulting CRPPs were compared. A previously developed kinetic model was used to simulate the degradation process at various peroxide concentrations. Modelling results for a mPP and a ZN-PP with similar molecular weight indicated that the MWDs of both materials approached “most probable distribution” (PDI=2) as expected, due to the random nature of the scission reactions involved. However, unlike the ZN-PP resin for which the polydispersity was sharply decreased, the MWDs of CRPPs from mPP was almost unchanged with a PDI of about 2. This indicated that polypropylenes from the two types could be used to produce CRPPs with specified/targeted MW and MWD patterns and therefore special properties. Two groups of tailor-made CRPPs were produced using mPP and ZN-PP. One group had similar MW but different MWDs and another group had similar melt flow rate (MFR). In particular, the zero-shear viscosity and rheological polydispersity, which were obtained through oscillatory iv shear rheometry, were successfully applied to monitor the MW level and the MWD of the products. The two series of materials were also submitted to extrusion tests using a single screw extruder equipped with a capillary die. Based on the extrusion results, with respect to the CRPPs of similar MW, materials of broader MWD, thus stronger shear-thinning at high shear rate, resulted in slower increase of extrusion pressure with apparent shear rate. The shear rate of the onset of extrudate melt-fracture, which coincided with previous studies of polypropylenes extrusion, was higher for broader MWD material. With respect to the CRPPs with similar MFR, a metric commonly used for grade inspection in industry, their extrusion behaviours were nearly identical.