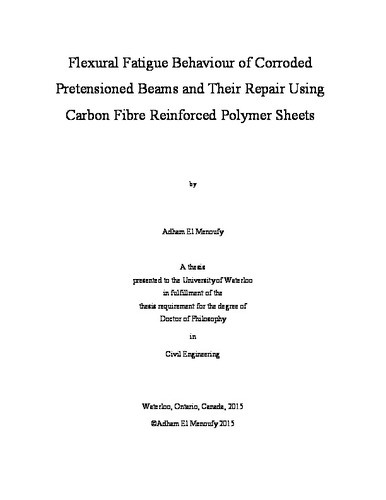 The study presented in this thesis investigated the flexural fatigue behaviour of non-corroded and corroded pretensioned beams and examined the use of externally bonded Carbon Fibre Reinforcement Polymer (CFRP) sheets as a repair technique aimed at restoring the loss in capacity due to corrosion. This was accomplished through an extensive experimental and analytical program. The experimental program was comprised of a material testing phase and a beam testing phase. The material testing phase consisted of testing seventy-two (72) material samples under monotonic and cyclic axial loading, full strand testing, and corrosion measurements of prestressing strands corroded while embedded in concrete prism. Material testing achieved multiple objectives: (a) it identified the rate of accelerated corrosion of the prestressing strands, (b) it quantified the distribution of the applied nominal tensile force among the seven wires within a single 7-wire strand in a prestressed strand, (c) it determined the material fatigue properties, and the stress-strain behaviour of the strand wires, and (d) it quantified the stress concentration factor in the prestressing strand due to corrosion. The beam testing involved constructing thirty-seven (37) 3.6 m long pretensioned T-beams and testing them in a four-point bending configuration. Twelve (12) beams were tested under monotonic loading, and twenty-five (25) beams were tested under cyclic loading. The main testing variables included: the corrosion level, the applied stress range, and a repair or the lack of it. Corrosion resulted in a significant deterioration of the monotonic and fatigue resistance of the beams in comparison to non-corroded beams, and repair using externally bonded CFRP sheet restored all or most of the monotonic and fatigue resistance lost due to corrosion. All beams failed by rupture of the prestressing strand. Inspection of the strand’s fracture surface showed signs of surface fretting. In addition, the fracture profile was similar to that reported by Toribio and Ovejero (2005) for hydrogen induced stress cracking of heavily cold drawn prestressing wires. Strands having corrosion levels of 5% and 10% by mass loss exhibited an overall section loss together with distinct deep corrosion pits. In the analysis phase, fatigue data measured from smooth axial samples taken from the centre wire of a prestrssing strand was used to model the fatigue behaviour of the outer wires of the 7-wire prestressing strand for corroded and non-corroded pretensioned beams. Strain-based fracture mechanics was employed in all the analyses, which included the flexure fatigue behaviour of: non-corroded and corroded single prestressing wires-in-air, a full 7-wire prestressing strand-in-air, and a non-corroded and corroded 7-wire prestressing strand in a beam. The mode results correlated well with the observed experimental results. This thesis presents extensive experimental work, along with an in depth fatigue analysis that is based on material fatigue properties obtained from simple single wire cyclic testing. The resulting modelling approach offers a mechanistic explanation of 7-wire prestressing strand failure under various conditions.