The Effect of Dual-Tasking on Information Processing in Contact Sport Athletes: Examining the long-term effects of Self-reported Concussion 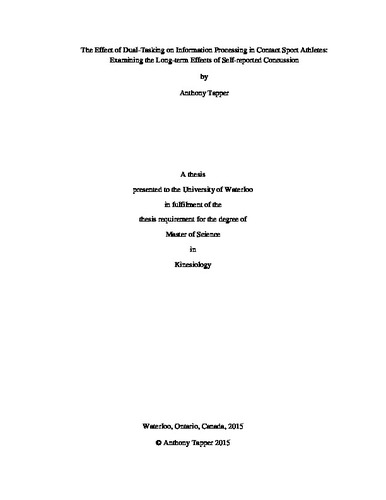 Objective: Concussions have been linked to deficits in executive functions including, memory and attention, and oculomotor dysfunction, all of which are required to play safely and successfully at an elite level. The goal of the current research was to understand the information processing abilities of varsity hockey athletes in attempts to determine the long-term effects of concussions. Additionally, our research compared clinical and experimental neurocognitive tests for discriminating athletes with and without a history of concussion who have returned-to-play. Since hockey players need excellent memory, attention, and executive function skills, a novel dual-task paradigm was developed by incorporating tasks that require visuospatial working memory and auditory processing. Method: Participants were 29 varsity collegiate ice hockey players (15 females, mean age= 19.1 +1.26, 14 males, mean age= 22.7 + 1.3). Eighteen athletes were diagnosed with a history of concussion based on self-report questionnaires, health history questionnaires, and prior physician diagnosis. The number of concussions were reported as follows: one (n = 9), two (n = 7), and three (n = 2). Participants performed a dual-task involving visuospatial working memory (Corsi block test) and auditory tone discrimination. Each task was presented individually (Vis-Single, Aud-Single), then simultaneously (VisAud-Dual). Eye movements were recorded using the Eyelink II eyetracker during the experimental tests. Also, participants completed a clinical neurocognitive test for concussions called the Immediate Post-Concussion Assessment and Cognitive Test (ImPACT). The main outcome measures were the Corsi block memory span and auditory tone discrimination accuracy. Four ImPACT composite outcome variables were measured including, Verbal Memory, Visual Memory, Visuomotor Processing Speed, and Reaction Time. Finally, the four oculomotor outcome variables measured were rate of task-relevant saccades, microsaccades, and other saccades, and saccade gain. Statistical analyses were completed using 2 and 3-way mixed ANOVA’s, and logistic regressions. The independent factors were two within-subject variables, Task Condition (single, dual), and Difficulty Level (# of targets to remember ranging from 3 to 7) and the between-subject variable was Concussion History (concussion, no concussion). Results: A 2-way mixed ANOVA on tone discrimination accuracy showed athletes with a history of concussion performed significantly worse on the tone discrimination task in the dual-task condition compared to the non-concussion athletes. No significant differences were shown when each task was performed alone, or on the Corsi block test in the dual-task condition. Two separate logistic regression models using ImPACT composites and dual-task measures identified auditory cost as the only significant predictor for Concussion History. Additionally, the dual-task test was more sensitive for discriminating athletes with and without a history of concussion compared to the ImPACT. A 3-way mixed model ANOVA on task-relevant saccades, microsaccades, and other saccades showed no significant differences between athletes with and without a history of concussion. However, a medium effect size was found for task-relevant saccades, which showed that athletes with a history of concussion had a higher rate of saccades. Additional analysis examining saccade gain for both horizontal and vertical saccades showed no significant difference between concussion history groups; however, a medium effect size was found which showed that athletes with a history of concussion had a higher saccade gain. Conclusions: Athletes with a history of concussion may have persistent deficits in executive functions. These deficits were only evident in previously concussed athletes when cognitive resources were stressed during the dual-task condition. In comparison to current clinical neurocognitive tests designed for concussions (i.e., ImPACT), tests examining executive functions appear to be more sensitive for discriminating athletes with and without a history of concussion, thus, should be included in current evaluation protocols. Finally, there were no statistically significant differences in gaze strategies; however, with the addition of more participants, gaze strategies may provide useful information into how athletes with and without a history of concussion encode visuospatial information. Therefore, further evaluation into encoding strategies may be helpful for developing training protocols for a safe return-to-play.