Opportunity in Absence: Activating Vacant Space in The Temporary City 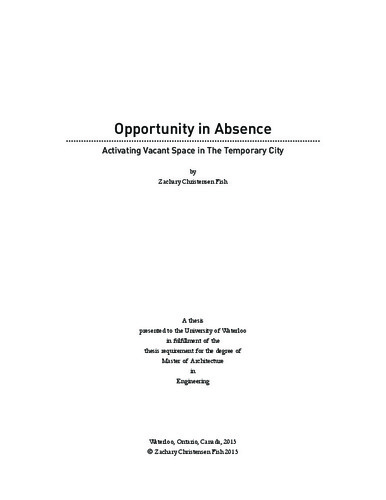 The vacant buildings in Cambridge await new uses as traditional commercial activity has shifted to the sprawl that defines the landscape between the city’s historic cores. Downtown businesses have been replaced by big-box suburban developments, leaving the question, what will fill the city’s urban voids? In declining manufacturing-based economies, like Cambridge, governments focus on attracting the “creative class” for economic growth. Cambridge selected the creative sector as a development target; however, the city has implemented few of the proposed changes from the economic development strategy commissioned in 2008. Further reports identify that the region lacks the physical creative sector space required for creation and networking within its existing building stock, despite statistics showing the commercial vacancy rate in downtown Cambridge climbed above 40 percent in 2013 (Colliers). The vacant buildings in Cambridge create an opportunity for potential programs to promote community engagement. Mobile architecture can be designed to support new activities, leveraging the vacant space into an urban laboratory for experimental programs. Bottom-up activism presents the opportunity to act quickly and empower citizens to contrast and complement the top-down, long-term policy strategies. Community initiatives that engage the public can play a role in developing social capital and civic identity. In a year of experimental work with BRIDGE (a student-led nonprofit initiative), a model program was developed to activate the vacant spaces on Main Street in Cambridge. These community activities, within the city’s waiting lands, illustrate a translation of theoretical principles and tactics to transform vacant spaces. Informed from the evolving temporary programs, a mobile architecture is proposed to activate empty spaces, bridging from short- to mid-term occupancy, while creating a unique identity with the ability to adapt as users’ needs and desires change. Conceived to occupy absent space, the proposed mobile architecture is designed as a portable, reconfigurable toolkit that can aggregate and disperse to support different spatial programs. Filling a void in the core, the space for production experimentation and community initiatives creates a temporary public asset from the city’s unused private capital. Building partnerships at the street level, the work aims to create discernible change within the limitations of the community by capitalizing on its strengths, while developing social capital and organizational capacity between citizens, nonprofits and public-private institutions. The absent space in the city presents an opportunity to prototype mobile architecture and new programs, transforming unused vacant space for productive community building.