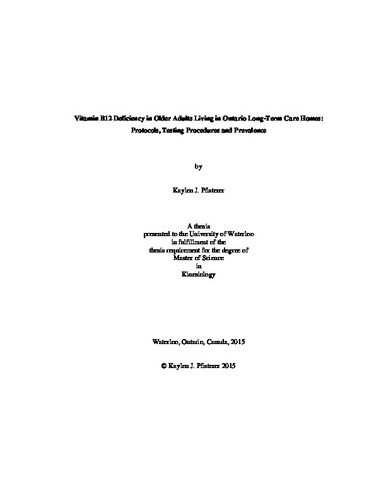 BACKGROUND: Vitamin B12 status is a relevant topic to older adults and deficiency has avoidable clinical ramifications. While classical symptoms of B12 deficiency are either hematologic or neurologic, presentation of these symptoms are not reliable as diagnostic tools as they are not present in all cases. Furthermore, symptoms of subclinical deficiency are nonspecific; a blood test is required for B12 status determination and as a first step towards treatment. B12 screening and treatment protocols in LTC have not been documented and no studies have been designed to establish vitamin B12 deficiency prevalence at admission or to describe incidence within this population. Furthermore, studies on prevalence using a cross-section of the LTC population lack representativeness. PURPOSE: The purpose of this thesis was to investigate vitamin B12 status in Ontario LTC homes. In particular, this thesis aimed to establish: what protocols and procedures are used in LTC for testing and treatment for B12 deficiency; the prevalence and what resident characteristics are associated with B12 deficiency at admission; and the incidence of B12 deficiency one-year post-admission. METHODS & FINDINGS: Two studies were conducted as part of this thesis work. Study 1: Forty five Ontario LTC homes were recruited using stratified random sampling from two sample frames, representing 5243 residents in this cross-sectional study. Phone interviews were conducted with directors of care using a standardized interview schedule for data collection. Interviewees were asked about policies and procedures for B12 testing, proportion of residents receiving B12 treatment and modality (oral, intramuscular, subcutaneous) used for B12 supplementation in their LTC home. Two-thirds (30/45) of participating sites routinely tested for B12 at admission, and 88% (34/40) of reporting homes conducted follow-up B12 testing. Furthermore, cut-off levels to define B12 deficiency varied between homes, presenting a challenge to determine prevalence. On average, 25% of current residents were receiving B12 supplements; the most common treatment modality was intramuscular injections (53%) followed by oral supplements (44%). Due to variability in practices relating to detection and treatment of B12 deficiency, LTC residents are potentially at risk for undetected deficiency. Study 2: A retrospective prevalence study was conducted across eight sites in Southwestern Ontario within one LTC organization. Random proportionate sampling was used to identify resident charts for inclusion, with replacement as necessary. Eligibility criteria were: residents being 65 years or older at admission and presence of admission bloodwork, including serum B12 levels. Resident characteristics considered for this study included: basic demographics, B12 supplementation prior to admission, medications, diagnoses, functional independence, cognitive performance, and nutritional status. 1005 charts were screened to obtain 412 total eligible residents. Average B12 deficiency prevalence at admission was 14% but only 48% of residents had normal B12 status at admission. Admission B12 status was significantly and positively associated with supplementation prior to admission (χ2=60.8, p<0.001). There was a significantly (p<0.01) higher proportion of B12 supplementation in those with dementia than those without. Prevalence and incidence of B12 deficiency one year post-admission was 7% and 4% respectively. With numerous sites and large sample size, the present study provides better insight into B12 status than previous work, and is the first to report both admission prevalence as well as one-year incidence. In general, B12 status in this LTC sample was poor, yet supplementation was a protective factor. OVERALL CONCLUSIONS: A relatively large proportion of LTC residents are impacted by B12 deficiency. While some protocols are in place for testing and treatment, some LTC residents are potentially at risk for undetected B12 deficiency. Treatment methods are generally effective, and should be used to deter progression to a deficient state. Prevalence was consistent with previous findings, including a high degree of variability depending on the cut-point used to define deficiency. This will remain a challenge, however screening, treating, and monitoring is important to prevent clinical manifestations, and deter symptoms associated with subclinical deficiency from presenting.