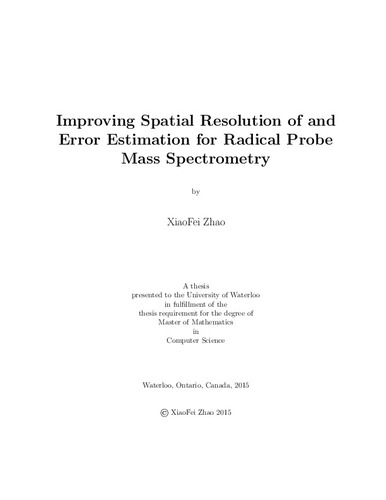 The function of a protein depends on the structure of the protein. A commonly used analytical technique for studying protein structure is radical-probe mass spectrometry (RP-MS). RP-MS oxidizes a protein of interest then quantitates the oxidation on the protein. Such quantitations can probe the solvent-accessible surface area (SASA) of the protein. This SASA can be used for studying the structure of the protein. Thus, the spatial resolution of such quantitations of oxidation is the spatial resolution at which protein folding can be studied. This thesis proposes a computational method for increasing, by many times, the spatial resolution of such quantitations of oxidation. Traditional RP-MS can already quantitate the oxidation on a peptide of a protein. MS/MS, which is also known as tandem mass spectrometry, is a technique in analytical chemistry. MS/MS can fragment a peptide into the suffixes of this peptide. Thus, the fraction of such individual suffixes of length i that are oxidized is the relative frequency that one of the last i residues of this peptide is oxidized. Thus, two such suffixes of lengths i and j, where i > j, correspond to two such frequencies. Thus, the difference between these two frequencies is the frequency that the oxidation on this peptide is inclusively between the i^th-last and (j + 1)^th-last residues of this peptide. The oxidation between these two residues is used by our computational method to quantitate oxidation at subpeptide level. Such quantitated oxidation extents match the previously published oxidation rates and are computed from an MS/MS dataset. The MS/MS dataset is produced by a specially designed RP-MS experiment. This RP-MS experiment used MS/MS that targeted six tryptic peptides of apomyoglobin (PDB 1WLA). However, such quantitations of oxidation are not precise, mostly because random errors exist in such fraction of the suffixes that are oxidized. Such a fraction is a type of peak-area fraction. A peak-area fraction represents, in a sample, the quantity of a type of molecule relative to another type of molecule. To estimate random errors in a peak-area fraction, we made three reasonable assumptions partially justified in the literature. From these assumptions, we mathematically deduced our empirical formula. Our empirical formula estimates random errors in a peak-area fraction that is observed in only one run of mass spectrometry. Such estimated random errors match the empirically observed random errors in a test dataset. The test dataset is generated by three almost repeated runs of MS/MS. To generate the test dataset and the MS/MS dataset, the same instrument analyzed, with similar configurations, two similar samples. Thus, our empirical formula is used for estimating random errors in such a quantitation of oxidation in the MS/MS dataset. MS^E is a technique in analytical chemistry. MS^E is similar to MS/MS. However, the throughput of MS/MS is lower than the throughput of MS^E by orders of magnitude. Unfortunately, we showed that, currently, MS^E almost certainly cannot improve the spatial resolution of RP-MS presumably because MS^E generates too much noise.