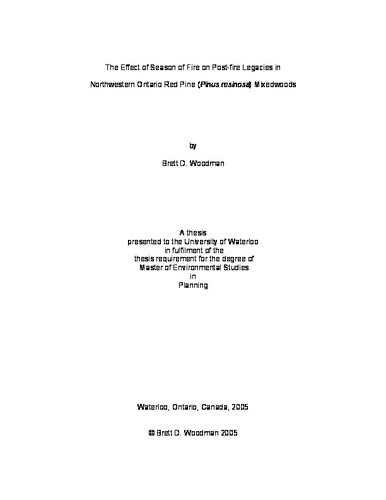 Prescribed burns are employed in the southern boreal forest of northwest Ontario, Canada, as a method of re-instating fire in this fire-dependent landscape. They are also used to manage fuel loads associated with tree mortality from defoliating insects and from blow-downs, as well as in-site preparation following harvest. The natural fire season in boreal Canada typically runs from April through September and is most often characterized by stand replacing fires. However, prescribed burns in northwestern Ontario are mostly scheduled for October when fire crews and equipment are available and fire hazard is reduced. In this study, three recent fires: a spring prescribed natural fire, a summer wildfire, and a fall prescribed burn were examined to assess the effect of season on post-fire legacies in red-pine mixedwood stands in Quetico Provincial Park, northwestern Ontario. Legacies were assessed by tree, shrub and herb species composition, and by measurements of structure such as litter depth, basal areas of live trees and coarse woody debris. Tree species diversity was nearly identical. Post-fire stand structure varied widely between the different sites. The spring treatment experienced the least mortality of trees (10% of basal area dead); the summer treatment had the highest mortality (100%); and the fall prescribed burn was intermediate with 49% dead. The effect of the fall burn on the forest was probably more intense than that of a comparable natural fall fire because of the way in which it was managed, thus partly compensating for the late season. <br /><br /> This research suggests that all fires are not equal. Different post-fire structure will have lasting ecological implications such as varying edge to interior ratios, and forest habitats. From a policy perspective this is important because maintaining ecological processes including fire is mandated for some provincial parks. In addition, the new Fire Policy for Ontario has established targets to limit wildfires, and permit ecologically renewing fires, without recognition of the variability of the effects of fire or fire legacies.