Last but not least: Resettlement as a climate change adaptation strategy in Metro Manila, Philippines 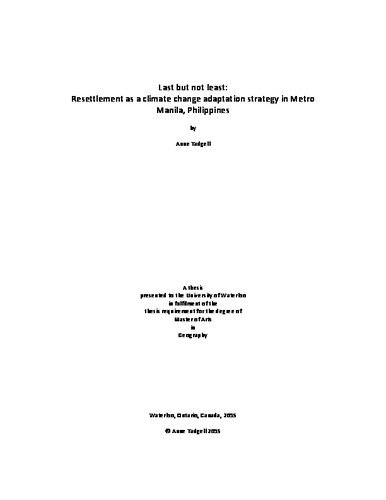 Abstract The severity of climatic changes threatening urban coastal areas is introducing and intensifying environmental hazards that are endangering physical safety and livelihood security. The Philippines, and the capital Manila in particular, is at extreme risk from intensifying climate change impacts, such as sea level rise and the increased frequency and intensity of storms, leading to increased runoff that quickly overwhelms existing flood infrastructure. These exacerbated risks require drastic adaptation actions than past coping strategies. One possible adaptation strategy is managed retreat, the facilitated movement of populations away from at-risk areas. Managed retreat can be conducted through resettlement, suggesting that the existing resettlement infrastructure for informal settlements in Manila could be an avenue for conducting future climate change adaptation in the city. This thesis assesses the feasibility of employing resettlement as a climate change adaptation strategy for low-income communities in less developed nations, using the case study of Manila, Philippines. It is written as two manuscripts, with linking pieces for clarity. The research first develops defining Principles for climate-related resettlement, and then applies them to Manila’s resettlement landscape to identify if resettlement is an appropriate climate change adaptation (CCA) strategy for the megacity. The study uses multiple research methods, including secondary data collection and analysis, and key informant interviews (n=27) with actors involved in resettlement, disaster risk reduction (DRR), and CCA Manila. The first manuscript outlines the concept of resettlement as climate change adaptation. The review considers three literature themes surrounding resettlement: (1) climate change, (2) hazard and natural disasters (i.e. floods, hurricanes, earthquakes) and (3) economic development (i.e. dam construction, natural resource extraction). Successful resettlement planning, approaches, and lessons learned are extracted to identify 5 Principles for resettlement in a climate change context: Proactivity, Communication and Participation, Permanence, Compensation, and Livelihood Protection. The results of the analysis suggest these 5 Principles are appropriate as a guideline for implementing resettlement as climate change adaptation for low-income and informal communities in less developed nations. Ultimately, these recommendations can be used to assess the feasibility of employing resettlement as managed retreat in less developed nations. The second manuscript assesses the feasibility of using resettlement as structured by the 5 Principles as CCA in Manila, Philippines. Using data from key informant interviews (KII) with resettlement, CCA, and DRR professionals, this research addresses the topic in three phases. First, it investigates the role of resettlement in existing CCA and DRR priorities and projects to understand if movement from environmental hazards is already occurring. Next, the research gathers interviewee perspectives on the applicability of the 5 Principles in relation to Manila’s existing resettlement landscape, and identifies any amendments or foreseen challenges to them. Finally, it explores the perceptions of resettlement, DRR, and CCA actors on the feasibility of employing resettlement as CCA in Manila, including any challenges that may impede the strategy. The findings suggest that there are some existing infrastructure that could be enhanced to include CCA planning as identified by the 5 Principles, such as in-city relocation sites and vertical housing. Poverty is the greatest challenge to implementing any successful adaptation strategy, including resettlement. Thus, poverty reduction may be the foundation of CCA planning for some urban poor communities in Manila. Further research is needed investigating the Principles identified as challenging to fully implement in Manila, including Communication, Compensation, and Livelihood Protection.