A Characterization of Bromine and Chlorine Stable Isotopes in the Sand Hills Region of Nebraska, USA 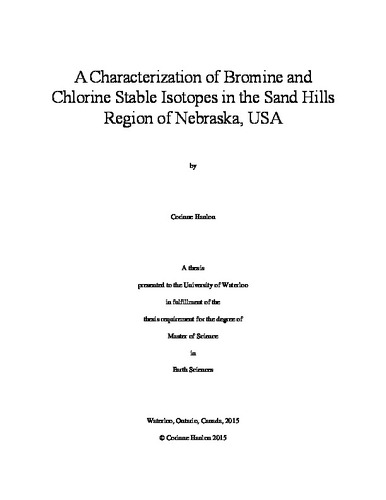 Saline lakes and salt flats are capable of releasing a significant flux of reactive bromine into the atmosphere, a compound which is 45-70 times more efficient at ozone destruction than chlorine (Eggenkamp, 2014; Risacher et al., 2006). Currently, very little information is available regarding the extent to which evaporitic environments contribute bromine to the atmosphere. Isotopic analyses using δ81Br and δ37Cl can help in distinguishing between natural and anthropogenic sources of atmospheric bromine. However, for this to be a possibility, a more thorough understanding of the environmental cycling of δ81Br and δ37Cl is required. Lake and salt samples were collected in 1992 and 1993 from previous studies in the region. The same lakes and salts were sampled again in 2012, 2013, and 2014 for this study, and were analyzed for δ81Br, δ37Cl, δ18O, and δ2H isotopic ratios, and geochemical properties. Several end-members within the region were analysed for isotopic and chemical parameters, as the interactions between these end-members may control the cycling of the isotopes throughout the region. The end-members which were considered in this study include the lake surface waters, the release of halide volatile gas, the precipitation of salts along the shorelines of the alkaline lakes, and the regional and local fresh groundwater systems. On the surficial salts and soils of the alkaline lakes, it was determined that two main processes, or end-members, are responsible for δ81Br and δ37Cl fractionation in this environment: salt precipitation, and microbial or photochemical reduction. It was demonstrated through the isotopic comparison of bulk salt samples and corresponding lake water samples that salt precipitation in this environment preferentially sequesters the lighter 79Br and the heavier 37Cl isotopes from solution. Captured gas samples from the shorelines of three different lake sites also showed depleted values in δ81Br isotopic signatures, which ranged between -1.02‰ to -0.72‰. This demonstrated that some process, photochemical or microbial, may lead to an enrichment of δ81Br in the soils as gas is released. Over time, regional changes in δ81Br and δ37Cl may be noted as these processes continue, causing lake waters to eventually enrich in δ81Br and deplete in δ37Cl. The ephemeral lakes in the region (Group 3 Lakes) may be particularly susceptible to these changes as they have high concentrations of TDS, and therefore salt precipitation is more common. In the subsurface of this environment, the behaviour of δ81Br and δ37Cl isotopes is controlled by the interaction between the saline lake waters and the fresh groundwater systems. It was determined that there are two isotopically distinct groundwater systems in this region. The regional system is highly depleted in both δ81Br and δ37Cl isotopic values relative to the surface waters (δ81Br = -1.16‰ – 1.48‰, δ37Cl = -1.1‰ – 0.72‰), whereas the isotopic values of the meteoric system is comparable to that of the lakes. The δ81Br isotopic signatures of the regional groundwater component range between -1.55‰ to -0.90‰, and the δ37Cl isotopic signatures range between -2.50‰ to -0.21‰. In comparison, the δ81Br isotopic signatures of the meteoric groundwater system range between 0.77‰ to 1.30‰, and the δ37Cl isotopic signatures range between -0.13‰ to 0.28‰. Four sediment cores were collected at three different lake sites in 2014 in order to observe the effects of the groundwater systems on the δ81Br isotopic signatures of the sediments with depth. It is possible that diffusional, and/or salt wash-down processes are present, as evidence of these exist in the cores from Wilkinson Lake and UNNJ Lake. The δ37Cl isotopic signature of the bottom of the Wilkinson Core is depleted to -1.79‰, which is similar to the δ37Cl isotopic signatures of the regional groundwater system, suggesting that there may be a slow upwards diffusion of the underlying regional groundwater into the subsurface of this area. The δ81Br isotopic signatures of the UNNJ core show regions of depletion which correspond to regions of higher TDS concentrations, indicating the possible presence of a salt wash-down effect.

Corinne Hanlon (2015). A Characterization of Bromine and Chlorine Stable Isotopes in the Sand Hills Region of Nebraska, USA. UWSpace. http://hdl.handle.net/10012/9683