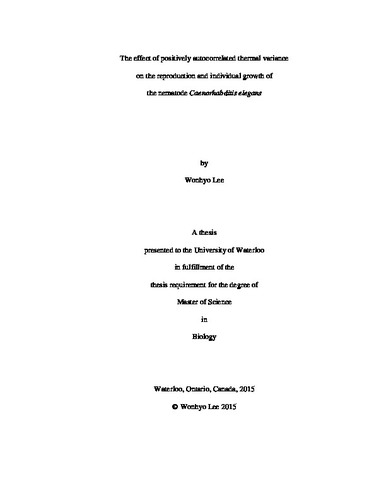 The effect of uncorrelated and positively autocorrelated temperature variance on the offspring production and individual development of the nematode Caenorhabditis elegans was examined at two different temperature means: a mean closer to the optimal temperature (20°C) and a lower, more suboptimal mean (16°C). Variance in temperature was introduced with a computer-controlled incubators, which changed the target temperature every 40 minutes. Offspring production was measured as the number of offspring produced by five adults during a 72-hour period, and individual growth was measured via estimated body length when the individuals were 75-81 hours old, and through time to maturation, observed every 12 hours. Uncorrelated variance had no effect on the offspring production, time to maturation, or body length for either mean temperature. However, when the temperature series was positively autocorrelated, where the condition at a certain time is dependent on previous conditions, it resulted in a decrease in offspring number, longer time to maturation, and shorter body length at mean 20°C. The negative effects of variance observed at mean 20°C were absent at mean 16°C, which is consistent with literature that suggests that mean temperature can influence the effect of variance on biological performance. The significant negative effect was only observed in positively autocorrelated treatments.