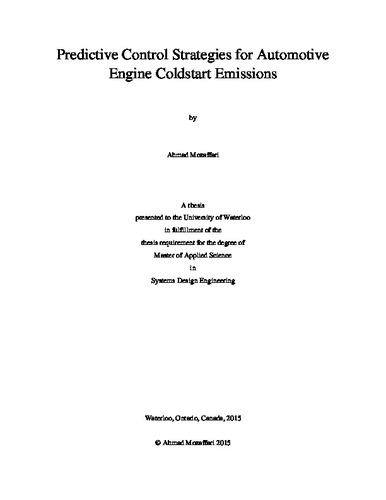 In this study, a comprehensive investigation is carried out to study the effectiveness of model-based predictive control strategies to solve a formidable automotive control problem, that is, reducing the amount of cumulative hydrocarbon (HC) tailpipe emissions or HCcum over the first few minutes of an automotive engine operation which is known as the coldstart period. More than 80% of the total HC emissions for a typical driving cycle are generated during the coldstart period. There is a physical trade-off between increasing the exhaust gas temperature (Texh) and reducing engine-out hydrocarbon emission (HCraw-c), which are two key variables affecting the engine performance during the coldstart operation. The design of an effective coldstart controller is associated with lots of difficulties because the behavior of the engine in the coldstart period is highly transient, uncertain, and nonlinear, and also, the key factors are in confliction with each other. In the light of promising reports on the performance of model predictive controllers (MPCs), here, different variants of MPCs are taken into account to find out whether they can effectively cope with the difficulties associated with the coldstart problem for a given automotive engine. The major advantage of MPCs refers to their power to handle different constraints while trying to minimize an objective function to come up with optimal controlling signals. Other than the standard version of MPCs, in this work, some novel versions of such controllers are proposed, which are best suited for the considered control problem. The considered versions of MPCs are: nonlinear MPC (NMPC), preference-based model predictive controller (PBNMPC), and receding horizon sliding controller (RHSC). Also, a powerful classical optimal controller based on the Pontryagin’s minimum principle (PMP) is taken into account to ascertain the veracity of the considered predictive controlling methods. Through an exhaustive simulation, the efficacy of proposed predictive controlling techniques is demonstrated, and also, it is indicated how well such controllers can optimize the related objective function at the heart of coldstart control problem while handling a set of the operating constraints.