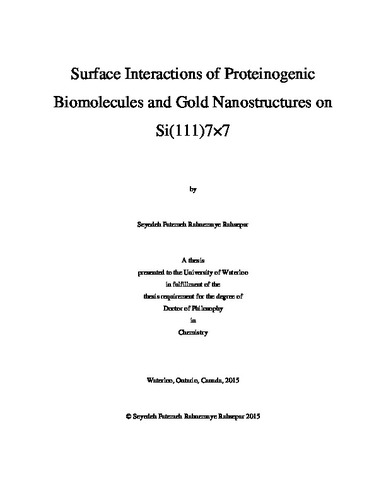 The site-specific surface interactions and film growth mechanisms of adsorption of gold and of proteinogenic sulfur-containing amino acids, i.e., L-cysteine and L-methionine, on Si(111)7×7 are studied for the first time by X-ray photoelectron spectroscopy (XPS) and Scanning Tunneling Microscopy (STM) at room temperature under ultrahigh vacuum condition. The results are supported with large-scale density functional theory (DFT) calculations with dispersion correction for biomolecule adsorbates, to provide precise modeling of the equilibrium adsorption geometries of adsorbates on a Si200H49 slab used as the model Si(111)7×7 surface. Growth evolution of gold on the 7×7 surface is found to follow the Stranski-Krastanov mode, starting with completion of two distinct gold silicide layers to individual gold nanoisland formation. Of special interest is the formation of two-dimensional self-assembled gold silicide honeycomb nanonetwork at 0.76 monolayer coverage at room temperature. Observed for the first time, this honeycomb nanonetwork is made up of six triangular gold clusters (surrounding each corner hole) interconnected to one another at the dimer rows of the Si(111)7×7 substrate. With the corner holes of the 7×7 surface exposed, this novel gold silicide template offers a unique honeycomb network (4 nm in grids size) for surface functionalization and a nanopore pattern (~1 nm in pore size) for molecular trapping application. In analogy to common simple aliphatic amino acids, such as glycine and alanine, sulfur-containing aliphatic amino acids, cysteine and methionine, exhibit an “universal” three-stage growth sequence on Si(111)7×7 surface at room temperature under ultra-high vacuum condition. In particular, the biomolecule first anchors to specific dangling bond sites on the 7×7 reconstruction via strong short-range covalent bonds (through Si–N and/or Si–S linkages in unidentate and/or bidentate arrangement of cysteine adsorption, and through Si–N linkage in unidentate arrangement of methionine adsorption), forming the interfacial layer (the first adlayer). This is then followed by the formation of a transitional layer (the second adlayer) and finally of a zwitterionic film (multilayer), both of which are driven by intralayer and interlayer hydrogen bonding. XPS study of thermal stabilities of these adlayers indicates that these proteinogenic biomolecules can be used to transform a highly reactive Si(111)7×7 surface to not just a permanent bio-organic surface but also a semi-permanent (or renewable) and a temporary bio-organic surfaces by manipulating the exposure and the post-annealing temperature. Our results on all the adsorbed proteinogenic biomolecules on Si(111)7×7 surface studied to date enable us to construct a reference XPS data table to guide future studies of biofilm growth on reconstructed Si(111) surface. The STM study of adsorbed cysteine on Si(111)7×7 provides strong evidence for coverage-dependent adsorption structures of cysteine, from bidentate to unidentate attachments to self-assembled multimers, which involves formation of intralayer horizontal N⋯H–O hydrogen-bond as reported in our XPS study. In contrast to cysteine adsorption, high-resolution STM imaging demonstrates self-organization of methionine into a novel, stable Y-shaped trimer within a half unit cell on the 7×7 surface at room temperature, which is driven by hydrogen bonding among the unattached carboxylic acid groups in a ring configuration. The near-perfect match of the Y-shaped trimer with three-fold symmetry within the half-unit cell represents the first supported “magic-number” molecular cluster reported to date. Our XPS experiments provide the primary experimental evidence for the formation of covalent bond between substrate and adsorbates and the feasibility of the intralayer and interlayer hydrogen bonding mediated dimers. They are also supported by our large-scale ab-initio DFT-D2 calculations. Using ab-initio DFT-D2 calculations, we also establish a common trend in the H-bond length among different types of hydrogen bonding (O–H⋯N < O–H⋯O < N–H⋯N < N–H⋯O) for di-molecular structures in the gas phase. Except for the N–H⋯N H-bond due to covalent bonding of the amino group with the surface, this trend can also be applied to biomolecular H-bonding surface interaction. These calculated results and the observed trends can be used to predict the adsorption behavior of larger biochemical materials, such as peptides and proteins. The ultimate goal of the present study is to examine the molecular interaction of these aliphatic amino acids with gold clusters and other metallic nanostructures supported on the 7×7 surface. We have performed preliminary XPS and STM studies on the molecular interactions of cysteine with three distinct gold nanoassemblies on Si(111)7×7, including Au monomers and dimers, Au silicide honeycomb nanonetwork, and Au nanocrystallite film. These studies show unidentate and/or bidentate bonding arrangement of adsorbed cysteine with rather minor perturbation due to the presence of the supported Au monomers and dimers. On the Au silicide honeycomb nanonetwork, we observe the coexistence of two chemisorption states, involving unidentate adspecies through the thiol group interaction with Au atoms and of the amino group with Si atoms. Cysteine is found to chemisorb via the sulfur in neutral form on the supported Au nanocrystallite film to form the interfacial layer. These STM/XPS studies are reinforcing our hypothesis that the novel gold silicide honeycomb nanonetwork offers a number of interesting potential applications for molecular trapping and biofunctionalization.