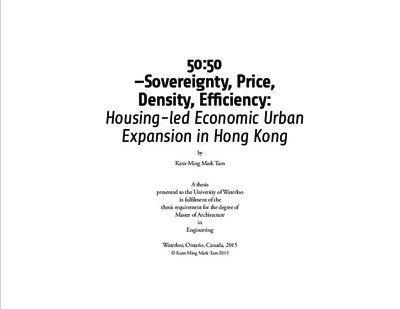 Hong Kong is an ideal laboratory in which to study relationships between economy and architecture. In this city, tremendous power is held by both the state and in private capital. Urban form may be read as a tangible spatial manifestation both calculated and inadvertent, of a historic model of economic development since its origins as a colonial outpost living in borrowed times. Significantly, housing dominates the urban landscape and the city’s economic underpinnings. The housing-led economic urban system is not a reflection of market rationality. Instead, it is a complex and protracted attempt to preserve its land system. In colonial history, British authorities relied on the leasing of lands to control its ongoing development and to benefit from its ongoing economic growth. Today, although the model allows administrators to finance the government and maintain low direct taxation, it also requires the perpetuation of spatial distortions and the inflation of housing prices. These distortions result in a housing system that divides its population into two equally populous economic classes: defined by the difference between public and private home ownership. Using a combination of photographs, illustrations, textual documentation, and spatial and statistical analyses, this thesis explores the social, economic and spatial impact of value maximization in four key areas: Sovereignty, Price, Density and Efficiency. These measures of productivity respectively address the domains of power, market, urban geography and architectural morphology. Hong Kong’s housing infrastructure is framed as a calibrated production, optimising all four aspects identified at the cost of chronic housing unaffordability. As space is designed for the abstract value it represents, Hong Kong has refined a rigorous process of spatial design that is paradoxically non-spatial, which has led to a homogenization of spatial forms amidst growing socio-economic polarization. The identification of spatial distortions and operations integral to the model’s logical irrationality is the primary intent of this thesis.