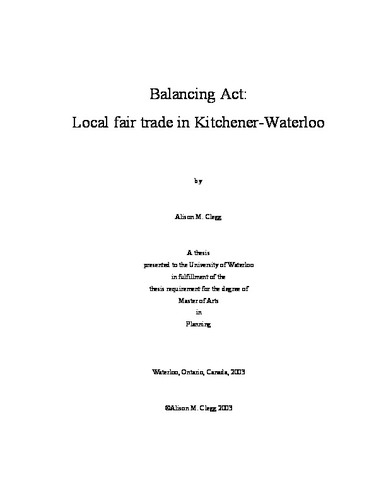 This research has investigated local fair trade in Kitchener-Waterloo, seeking to determine its extent, the supports and obstacles it experiences, and the reasons people engage in it. Local fair trade combines localism with the ethical principles of fair trade, and is defined as 'any business for which profit-making is a means to achievement of social goals through local action'. Twenty-eight key informant interviews were conducted with local practitioners of fair trade, and with experts knowledgeable about fair trade, business, and Kitchener-Waterloo. Five follow-up interviews with practitioners added to the data on people's motivations for working in local fair trade businesses and organizations. The research revealed that many local fair trade businesses exist in Kitchener-Waterloo, but these businesses do not see themselves as connected with one another in the practice of local fair trade. No formal or informal network exists among them. The research findings indicated numerous major supports for local fair trade including: funding, volunteers, public awareness, a focus on business management, connections between producers and consumers, support from community and individuals, and action for change on multiple levels. Interestingly, the major obstacles to local fair trade were all associated with major supports. Obstacles included financial issues (high costs, low income), need for funding, difficulties with business operations, and a lack of public support, awareness, and understanding. People were motivated to work in local fair trade by a sense that what they did was 'good' or 'right', by a desire to work towards increasing people's economic security and human development, and because they wanted to promote sustainability, human health, and a healthy environment. The findings suggested that business issues are an ongoing source of challenge for many local fair trade businesses and organizations. They also suggested that local fair trade involves a difficult balancing act between business goals and social goals. The research highlighted a perceived need for greater public awareness and support for the goals of local fair trade, as well as, contradictorily, a sense that local fair trade would be more successful if it could reach 'mainstream' consumers through good business practice (rather than shared values). The research concluded that local fair trade, while present in Kitchener-Waterloo, needs better support and promotion for existing businesses to represent a serious alternative to conventional economics. Promotion must occur on various levels, from the education of individuals to advocacy at the international level, in order to promote fair trading rules and the rights of localities to make decisions in favour of localization and of environmental protection. Promotion should also include making information on local fair trade available to prospective and current business-people, investigating a long-term solution to the problem of funding, and developing a network for local fair trade business and organizations.