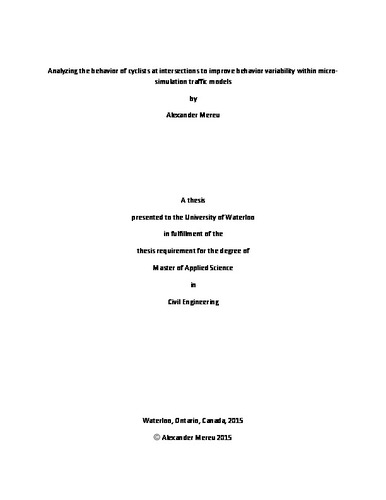 The purpose of this thesis can be separated into two components: Component 1: The purpose of this component was to update the input parameters for cyclists for application in mixed-traffic micro simulation models. This component used GPS data from cyclists to develop distributions of desired speed under variable road and facility conditions. Desired speed distributions as a function of road grade and the effect that road surface and facility type have on desired speed were analyzed. The findings suggest that facility type (multi-use trail, bike lane, and no bike lane) had no significant effect on the desired speed of the cyclists in the study. A distribution of the desired speed of cyclists was developed and can be applied to improve variability within micro-simulation traffic models. Component 2: The purpose of this component was to observe and analyze the left turn behavior of cyclists at different types of signalized intersections in the City of Toronto with the intent of recommending what facilities are most effective at facilitating left turning movements under varying input conditions. From the observations, a database was created that includes turning behavior, approach conditions, and individual cyclist related variables for each cyclist. By analyzing the behavior data base, conclusions were made regarding the effect that intersection type, facility type, and input conditions have on the rule compliance and facility compliance of the cyclists that were observed. From these conclusions, recommendations have been made that are intended to suggest some facility interventions that will result in improved rule compliance and facility compliance, ultimately creating a more comfortable cycling environment and one that matches that natural tendencies of cyclists in the city. The measurement of rule compliance in this report is based on the simple observation of whether the cyclists, when making a left turn at the intersection, complied with the rules of the road or broke the rules of the road as defined by the Ontario Highway Traffic Act. The measurement of facility compliance is based on whether the cyclist made a left turn using the facility as the design intends them to use it. Cyclist behaviors at five different intersection configurations were observed in the study. This sample of intersection configurations is significant as they represent most of the generic intersection types that are located throughout Toronto’s cycling network. The distribution of these behaviors for each intersection type can be considered in micro-simulation models when considering the stochastic nature of a cyclists and their decision process with regards to navigating a left turn through an intersection. Facilities with more left turning options proved to promote rule compliance more so than the intersections with fewer options.