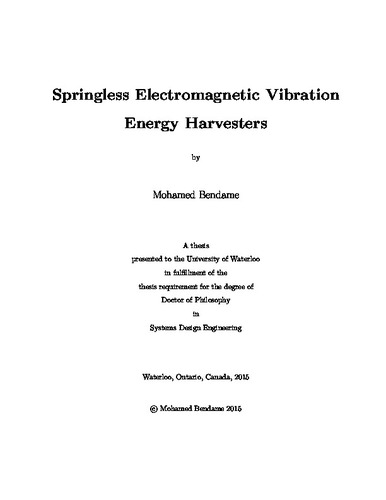 The abundance of environmental kinetic energy combined with advances in the electronics and MEMS industries have opened a window of opportunities for the design and fabrication of self-powered, battery independent, low-power electronic devices. Kinetic energy harvesting, the process that captures vibrations from the environment or surrounding systems and converts them into electrical power, o ers the prospects of unlimited power for such systems. Vibration energy harvesters (VEHs) are vibration-based micro-power generators that utilize mechanical oscillators to capture ambient vibration energy and convert it into electrical power using one of three main transduction mechanisms, electromagnetic, electrostatic, or piezoelectric. A key feature of VEHs is their ability to harvest maximum environmental vibration energy from low amplitude and low frequency vibrations from a wide spectrum of frequencies. Traditional VEHs use linear mechanical oscillators as their harvesting element and are tuned to harvest environmental vibrations at resonance frequency present within the application environment. These VEHs are usually designed to harvest energy from high frequency vibrations in a narrow band in the vicinity of the natural frequency of the mechanical oscillator, and outside this narrow band of frequencies their output power is signi cantly reduced. In environments where ambient vibrations are random and only available at low frequencies, conventional harvesters prove to be ine ective. Although such devices are capable of generating power from vibrations with frequencies close to their resonance frequency, the need for harvesters that can harvest energy from broadband vibration sources has become an interesting research topic in recent years. To overcome the limitations associated with traditional vibration energy harvesters, nonlinear phenomena, such as hardening and softening nonlinearities, magnetic levitation, and pact have been sought as a solution to broadband vibration energy harvesting. In this thesis we aim to address this challenge by investigating a new architecture of an electromagnetic vibration energy harvester, the electromagnetic \Springless" vibration energy harvester (SVEH). The new architecture di ers from traditional harvester as it uses a double-impact oscillator as its harvesting element as opposed to the linear model. Experimental results show that the new SVEH is capable of harvesting vibration energies with frequencies as low as 5Hz and amplitudes as low as 0.05 g in a frequency band of about 8Hz. The harvester generates maximum output power of 12 mWatt from vibrations with amplitude of 0.5 g and an optimal load of 3.6 ohms. Experimental results also show that the "nonlinear" center frequency of the harvester is not constant, as in the case of conventional harvesters, but depends on the amplitude and frequency of the external vibrations and whether the harvester is operated in the vertical or horizontal position. Experimental as well as the numerical frequency response curves of the SVEH also show the existence of hardening nonlinearity in the horizontal con guration and softening nonlinearity in the vertical con guration in the system. The hardening e ect allows harvesting of energy in the high frequency spectrum, about 25 Hz and a bandwidth of 7 Hz, while the softening e ect allows harvesting at the lower end of the frequency spectrum, which is around 5 Hz and a bandwidth of 8 Hz. Models of the SVEH in the vertical and horizontal con gurations were developed and nonlinear numerical and analytical methods were used to analyze the system to gain a deeper understanding of the system's behavior. The experimental data is then used to validate the models. The harvester's ability to harvest vibration energy from low frequency ( 25Hz) and low amplitude vibrations ( 0:5g) in a wide band ( 5Hz) is one of the unique features of the SVEH demonstrated in this work.