Implementation of a GIS to Assess the Effects of Water Level Fluctuations on the Wetland Complex at Long Point, Ontario 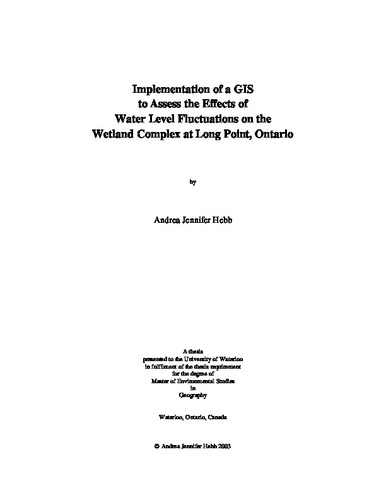 The Long Point wetland complex is one of the most significant coastal wetland systems in the Great Lakes, containing a diverse mosaic of wetland vegetation communities that have developed in response to water level fluctuations due to natural climate variability. Natural short-term water level variations are important for promoting wetland productivity and diversity, but long-term water level changes resulting from human-induced climate change can have serious and long-term consequences on the integrity and health of wetlands. The historical response of the wetland to water level fluctuations was quantified and modelled to provide an indication of how the wetland may respond to future projected water level changes - water level fluctuations are used as a surrogate for climate change. A spatiotemporal trend analysis was conducted within a geographic information system (GIS) to determine the effects of water level conditions on wetland vegetation and land cover at the wetland complex at Long Point, Ontario for seven years from 1945 to 1999. The spatiotemporal trend analysis documented changes in the structure and composition of the wetland complex in response to declining and rising water level conditions. During drier periods, there were significant increases in the amount of drier emergent and meadow vegetation, especially within the Inner Bay and northern portion of the outer peninsula. There was less fragmentation and complexity in the wetland as these drier communities expanded forming larger continuous patches of vegetation. During wetter periods, open water increased and there was a predominance of wetter emergent and meadow communities in the wetland. Drier vegetation communities became interspersed with water creating a more fragmented convoluted wetland landscape. The historical response of the wetland vegetation and land cover to water level fluctuations was then simulated with three different wetland models developed in the GIS. A rule-based model, a probability model, and a transition model were developed to assess wetland response to future water level changes. The models were evaluated using simple statistical methods. The transition and rule-based models performed the best and were successful in predicting over 80 % of the wetland vegetation distribution correctly. The probability model was the least successful, predicting only 55 % of the response correctly. The GIS proved successful in documenting wetland response to historical water level fluctuations and providing insight into the potential impacts of future climate change though water level fluctuations on the Long Point coastal wetland complex. The spatiotemporal analysis and wetland modelling advance the role of GIS in wetland management and analysis. They are practical methods within a GIS that can be used to assess the impacts of climate change on wetland systems and to document and model wetland change in other coastal wetlands of the Great Lakes.

Andrea Hebb (2003). Implementation of a GIS to Assess the Effects of Water Level Fluctuations on the Wetland Complex at Long Point, Ontario. UWSpace. http://hdl.handle.net/10012/965