After October: An Analysis of John F. Kennedy's Foreign Policy after the Cuban Missile Crisis 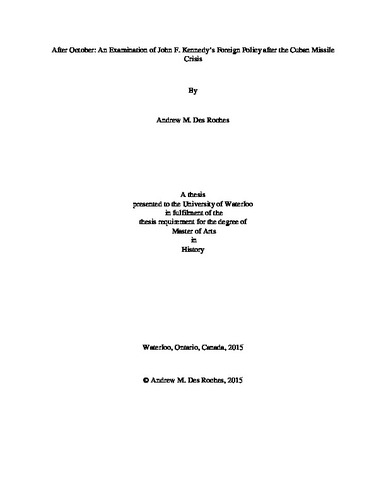 This thesis analyzes President John F. Kennedy’s articulation of foreign policy after the near nuclear confrontation in October 1962. This thesis finds that the Cuban Missile Crisis had a very profound effect on the president, which became evident in his policy towards Cuba and the Soviet Union. In Cuba, the president slowly began considering other options than the destabilisation of Castro. Despite significant domestic pressure, President Kennedy developed a nuanced policy in Cuba that reflected the growing acceptance of Castro and the communist government in Havana. President Kennedy’s overtures to the Soviet Union likewise demonstrate his statesmanship. Throughout 1963, Kennedy worked diligently to ensure some meaningful diplomacy could be achieved with his counterpart Chairman Nikita Khrushchev. Kennedy continued to push for better relations between the two superpowers until his tragic assassination on November 22, 1963. This paper is a contribution to the study of the Cuban Missile Crisis and the inherent limitations of nuclear weapons as a tool of foreign policy.