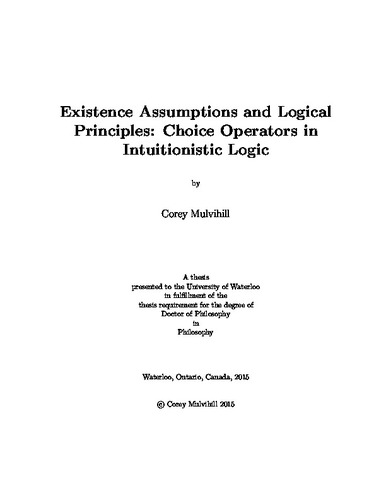 Hilbert’s choice operators τ and ε, when added to intuitionistic logic, strengthen it. In the presence of certain extensionality axioms they produce classical logic, while in the presence of weaker decidability conditions for terms they produce various superintuitionistic intermediate logics. In this thesis, I argue that there are important philosophical lessons to be learned from these results. To make the case, I begin with a historical discussion situating the development of Hilbert’s operators in relation to his evolving program in the foundations of mathematics and in relation to philosophical motivations leading to the development of intuitionistic logic. This sets the stage for a brief description of the relevant part of Dummett’s program to recast debates in metaphysics, and in particular disputes about realism and anti-realism, as closely intertwined with issues in philosophical logic, with the acceptance of classical logic for a domain reflecting a commitment to realism for that domain. Then I review extant results about what is provable and what is not when one adds epsilon to intuitionistic logic, largely due to Bell and DeVidi, and I give several new proofs of intermediate logics from intuitionistic logic+ε without identity. With all this in hand, I turn to a discussion of the philosophical significance of choice operators. Among the conclusions I defend are that these results provide a finer-grained basis for Dummett’s contention that commitment to classically valid but intuitionistically invalid principles reflect metaphysical commitments by showing those principles to be derivable from certain existence assumptions; that Dummett’s framework is improved by these results as they show that questions of realism and anti-realism are not an “all or nothing” matter, but that there are plausibly metaphysical stances between the poles of anti-realism (corresponding to acceptance just of intutionistic logic) and realism (corresponding to acceptance of classical logic), because different sorts of ontological assumptions yield intermediate rather than classical logic; and that these intermediate positions between classical and intuitionistic logic link up in interesting ways with our intuitions about issues of objectivity and reality, and do so usefully by linking to questions around intriguing everyday concepts such as “is smart,” which I suggest involve a number of distinct dimensions which might themselves be objective, but because of their multivalent structure are themselves intermediate between being objective and not. Finally, I discuss the implications of these results for ongoing debates about the status of arbitrary and ideal objects in the foundations of logic, showing among other things that much of the discussion is flawed because it does not recognize the degree to which the claims being made depend on the presumption that one is working with a very strong (i.e., classical) logic.