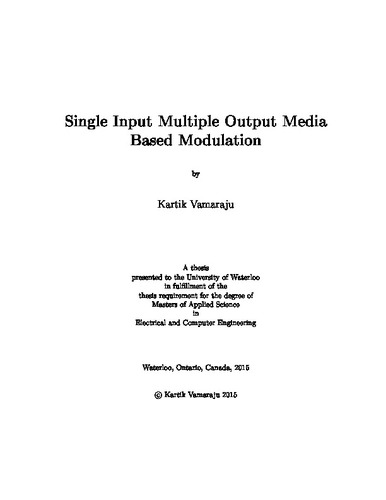 Modulation is traditionally based on the idea that signal constellations should be deterministically constructed and known by the transmitter and receiver. Communication involves the transmitter randomly selecting from this known finite constellation. This is an example of Source Based Modulation (SBM). Media Based Modulation (MBM) is a departure from this paradigm. Tunable mirrors at the transmitter are used to establish independent channel realizations, the selection of which is used to encode information. The main topic of this thesis is communication involving a Single-Input Multiple-Output (SIMO) MBM system communicating over a static Rayleigh fading channel when there is perfect Channel State Information (CSI) at the receiver. Simulation results are presented to demonstrate various aspects of MBM system performance that are different from comparable SBM systems communicating over an Additive White Gaussian Noise (AWGN) channel. The application of channel coding to MBM is then discussed and simulation results involving the application of a Single Parity Check (SPC) symbol code applied to an MBM system are presented. The geometry of MBM constellations has a significant impact on coding gain, and consequently the coding gains with MBM are different then with SBM. Finally, a novel algorithm is developed to solve the Maximum Likelihood (ML) symbol detection algorithm for MBM using ideas from sphere decoding. Various methods of improving computation speed at a cost of introducing approximation error are also presented. An approximate ML symbol detection algorithm is presented in which the search radius is determined by the infinity norm and the optimal candidate selection is determined by the 2 norm. Simulation results demonstrate the reduction in search effort by using the approximate algorithm.