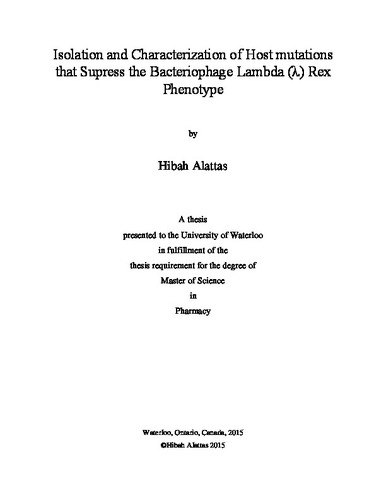 The Bacteriophage lambda (λ) T4rII exclusion (Rex) phenotype is defined as the inability of T4rII mutant bacteriophage to form plaques on a lawn of E. coli lysogenized by bacteriophage λ. More than six decades have passed following the discovery of Rex by Seymour Benzer in 1955, yet the mechanism behind this elusive exclusion system remains a mystery. The Rex system is encoded by two genes of λ (rexA, and rexB), the expression of which, is primarily regulated by the repressor gene cI from the PM promoter. The onset of the Rex phenotype, somehow triggered by T4rII infection of a Rex+ lysogen, results in rapid membrane depolarization and a harsh cellular environment that in many ways resembles the stationary phase in metabolism and morphology. In addition, the disruption of the RexA:RexB balance, particularly the over expression of rexA to rexB, can lead to same manifestations without infection, indicating that stoichiometry of RexA:RexB is important. Despite some cell killing, infected lysogens can to some extent recover from Rex activation. The phenotype may thus be a mutualistic protection mechanism that protects both itself and the host cell from external super-infection. In this study, I have designed a system for the rapid one-step isolation of host mutations that attenuate this phenotype, in order to identify the host genes involved in Rex and elucidate the mechanism of this enigmatic exclusion system. In so doing, I was able to isolate 13 host mutations of E. coli K-12 that abrogate the Rex phenotype while simultaneously identifying for the first time several outer membrane protein genes including: ompA, ompF, ompW, and ompX that are essential in imparting Rex activity. In analyzing these omp mutants it was noted that several of these identified omp candidates play a critical role in cellular osmotic balance and the onset of stationary phase. This work substantiates a model whereby the onset of Rex shunts cells into a temporary stationary phase-like state that inhibits T4rII phage growth.