Impact of Biofilter Backwashing on the Biofiltration / Ultrafiltration Process 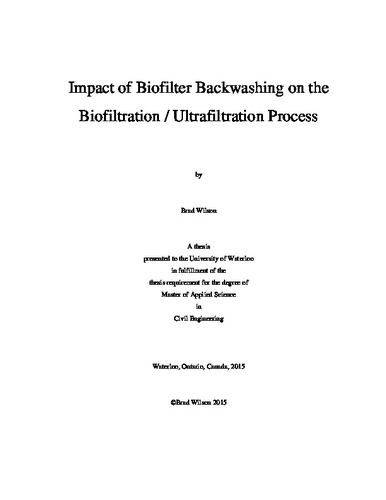 The use of ultrafiltration membrane technology for drinking water treatment has seen a marked increase in the past few decades, however, membrane fouling remains the top technological hurdle in the way of its widespread use. Multiple membrane pretreatment methods exist to alleviate this issue, however, they can be complicated and involve the addition of chemicals to the system. A novel method, known as biofiltration without pretreatment, is a green alternative to conventional membrane pretreatment, and has been shown effective at both the laboratory and bench scale in proof of concept studies. It is unknown if the conventional biofiltration operational experience, applies to biofiltration without pretreatment especially as it relates to filter backwashing. To this end, the goal of this study was to investigate the performance of biofiltration without pretreatment as a membrane pretreatment under varying water quality conditions, as well as to test the effect of various backwashing parameter settings on the system performance. To perform this study, a pilot plant was constructed at the Mannheim water treatment plant in Kitchener Ontario. This plant consisted of multiple identical biofilter columns running in parallel. For this study, dual identical biofilters run in parallel were used, with one being a control and run under constant backwashing conditions, while the other, an experimental filter, was run over a range of backwashing conditions according to a statistical experiment design. The dual media filters (anthracite over sand) used in this study were run with a 7 minute empty bed contact time. This study was divided into two parts. In the first part, focus was placed on the performance of the biofilters and in the second part the combined process, that is the use of biofilters without pretreatment as a membrane fouling reduction pretreatment, was investigated. In both cases, the effect of changing inlet water quality parameters, as well as the effect of backwashing parameters (collapse pulsing time, wash time, wash expansion and membrane run delay) was investigated. Performance of both sections of the plant was monitored through a combination of online and laboratory measured parameters. Biofilter turbidity, temperature, headloss, as well as membrane temperature and transmembrane pressure were monitored online. In the laboratory, liquid chromatography with organic carbon detection was used to measure the concentrations of various water constituents. Fluorescence emission and excitation matrices were also used for this purpose. In addition, dissolved organic carbon, and ultraviolet light absorption were also measured. The consumption of dissolved oxygen by biofilms attached to biofilter media was quantified as a means to determine biological activity within the biofilter. In terms of biofilter performance, the backwashing factors studied were found to have no effect on the biological activity, either through the removal of nutrients, or by the amount of biomass on the biofilter media. However, these factors were found to influence turbidity removal and headloss accumulation by the biofilters as well as the removal of suspected membrane foulants, namely biopolymers and protein-like material In terms of membrane performance, the irreversible fouling rate was found to be correlated to the amount of biopolymers applied to the membranes and reversible fouling was found to not be correlated to any of the parameters studied. The amount of turbidity applied to the membranes was shown to a play a complex, role in this fouling as well. Backwashing was also shown to have an effect on irreversible fouling, suggesting that the backwashing regime may be optimized for the reduction of irreversible fouling. Although the backwashing procedure was found to have an effect on both the reduction of irreversible membrane fouling and the headloss buildup (hence biofilter run time), these two parameters were found to be affected in opposite , meaning that one may be optimized at the expense of the other. Therefore process optimization must be undertaken with specific goals in mind. It was found however, that the filter run time of the biofilters may be extended by optimizing the biofilter backwashing procedure. The results of this study provide a frame work for which to further study the influence of backwashing on biofiltration without pretreatment used as a membrane pretreatment by pointing to the backwashing parameters which have the greatest effect on performance. Moreover, the results of this study may be used as a starting point for more in depth optimization exercises.