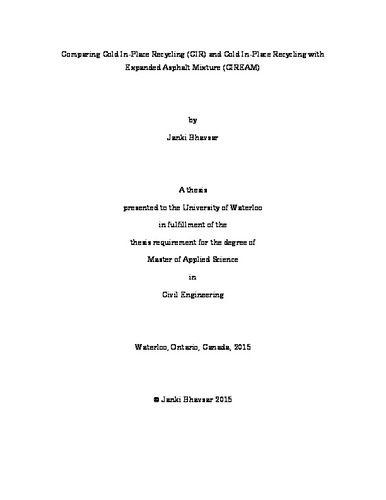 Cold Mix Asphalt (CMA) is used in several rehabilitation techniques, which uses 100% Reclaimed Asphalt Pavement (RAP), thus making it a sustainable product in the industry. Using CMA for rehabilitation decreases the energy consumption and greenhouse gas emissions. In Ontario, it has been implemented over the past 17 years. There are two main techniques used for CMA: Cold In-Place Recycling (CIR) and Cold In-Place Recycling with Expanded Asphalt Mixture (CIREAM). It is necessary to determine the performance of these techniques in order to determine the age of the pavement and expand their applications. There is a lack of laboratory and field performance information in Ontario for these two techniques. Thus, in this study, laboratory investigation was carried out to establish and compare the material performance of CIR and CIREAM. In addition, a field study was conducted which involved the evaluation of several road sections which have used CIR and CIREAM techniques. For this project, the test material was collected from road sections in Ontario, thus, this study was focused on CIR and CIREAM applications in Ontario and tests were based on standards followed by the province. Although the study was conducted for Ontario, the methodology may be applied outside of Ontario with similar climate conditions. However, the results would vary based on the type of material used. The laboratory study included testing for the overall stiffness, tensile strength, and fatigue behavior of the test samples to simulate their long-term performance. RAP was extracted from southern and northern parts of Ontario to make the test samples. A curing duration test was conducted using the dynamic modulus test apparatus. This test was done to determine a curing time of CIR samples in the laboratory which provided the best stiffness. For the stiffness test, sample mixes were constructed with varying percentages of asphalt cement (AC). From these mixes, the best performing mix was chosen based on its workability, rutting resistance and overall stiffness. The fatigue and tensile strength tests were conducted using the optimal mix chosen from the stiffness test and the samples were cured according to the results from the curing duration test. From the curing duration test, it was concluded that curing the CIR samples for 14 days after compaction gave a higher stiffness to the mix. For the CIR mixes using southern Ontario RAP, the mix with 3.2%AC performed well in comparison to the other mixes. The CIREAM mixes with varying percentages of AC had an overall similar performance. The fatigue testing showed that both CIR and CIREAM samples had similar fatigue resistance. The TSRST tests showed that CIR samples exhibited more shrinkage in comparison to CIREAM and they had higher tensile stresses at failure. The dynamic modulus testing of the CIR samples using northern Ontario RAP showed no statistically significant differences between the mixes. The gradation of the RAP used had a large impact on the stiffness and workability of the sample mixes and their performance. The field study included road sections with varying roadway and pavement attributes. Data was collected from various municipalities which included the City of Waterloo, County of Peterborough, Region of Northumberland, York Region, Haldimand County, County of Perth, County of Wellington, and the united counties of Stormont, Dundas and Glengarry, along with the Ministry of Transportation Ontario (MTO). This data highlighted the limits of all road sections which had implemented CIR or CIREAM within the municipalities. Approximately 200 road sections were identified which had used CIR or CIREAM techniques. These sections were visually inspected in three different municipalities; specifically the City of Waterloo, Perth County, and the united counties of Stormont, Dundas and Glengarry. From the visual inspections large amounts of deteriorations were observed where greater number of trucks, poor drainage and low speeds were prevalent. Field data evaluation showed no significant effect on physical condition, PCI or rut depth of the roadway due to age, AADT or AADTT, respectively. To date, these techniques are used on low volume roadways but there is also an opportunity to expand to higher volume roadways to promote sustainable use of recycled asphalt. These techniques are sustainable due to their use of 100% recycled aggregates and low energy consumption. Thus, by closing the research gap on their performance information, it would help broaden their application.