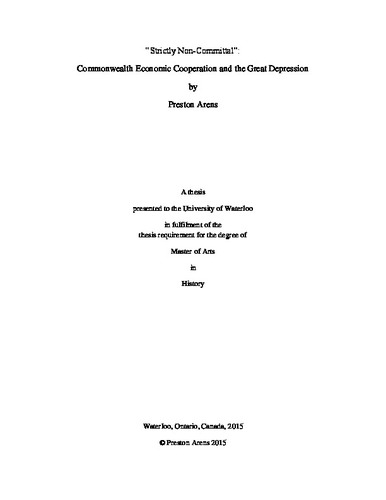 This thesis explores the effects of the Great Depression on the nascent British Commonwealth, with particular emphasis on whether economic crisis fostered cooperation or division among member states. In doing so, this project resituates our conceptions of the early Commonwealth from a purely imperial understanding, to one which considers the Commonwealth as a predecessor to modern supranational organisations. Ultimately, the Depression exacerbated divisive trends within the Commonwealth, but lingering imperial economic and political structures resulted in somewhat begrudging cooperation and coordination in response to the crisis. The self-interest of individual states in response to economic crisis, and the role of structures in fostering cooperation within supranational organisations are promising areas for further research regarding both the early Commonwealth, and the operation of more contemporary supranational organisations.