"The Academy Award of Protest": Media, Cooptation, and Radical Identity in the Sixties 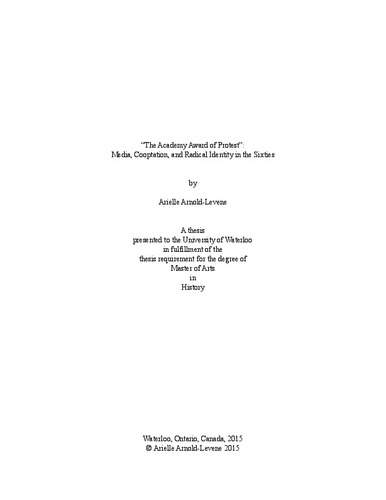 Through the 1960s and into the early 1970s, radicals in the New Left and the counterculture struggled with how to remain relevant and authentic in the face of skewed and selective mainstream media representation. They often referred to this kind of media representation of their politics and their culture as “cooptation” or “neutralization,” as mainstream society adopted the most attractive, salable aspects of dissident style, while leaving behind its most radical or threatening elements. This thesis examines how dissidents struggled with cooptation, but also how they themselves coopted “establishment” institutions for their own radical purposes. It then examines how dissident culture attempted to define radical authenticity and radical purity amongst themselves and amongst mainstream society, as they confronted the pressures of the radical lifestyle.