A Nation of Gamers: The History of Video Games in Canada 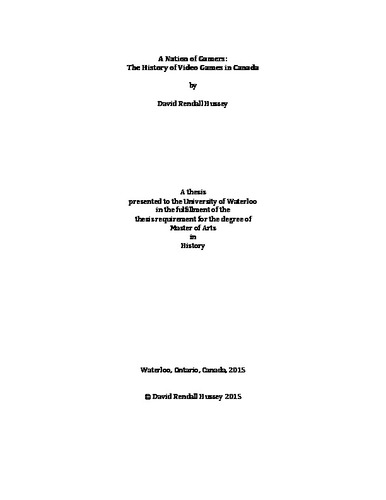 This thesis is a study of the economic, cultural, and political impact of video games in Canada. The trajectory of video games will be mapped beginning with the arrival of video games in Canadian markets in the mid-1970s and ending in the 2000s, with the debut of the Globe and Mail’s gaming section and the finalization of Ubisoft’s $263 million deal with the Ontario Government. Through this journey, it will be shown that over this roughly thirty-year period, video games have become interwoven into the everyday life of Canadians. Today in Canada, many regard video games as important cultural objects and a growing economic sector, yet this was not always the case. The industry has managed to thrive thanks to government influences and arrivals of anchor studios at key times. Yet in the media and the government, video games were seen as a nuisance and threat to children for much of the 1970s, 1980s, and 1990s, and faced many opponents that urged them be banned or censored. Despite these scares, video games were able to grow and be consumed in Canada without the implementation of government restrictions. This history of video games in Canada argues that these factors were caused by a generation gap and larger moral panic, which dissipated after it grew into such a large enough industry and market, that it became lucrative to Canada as a whole. This research shows the reactions that disruptive technologies can instill into a nation and the lack of government involvement speaks to the influence that video games and its industry hold in Canada