Pragmatic language use, inhibitory control, and attention in typically-developing preschoolers 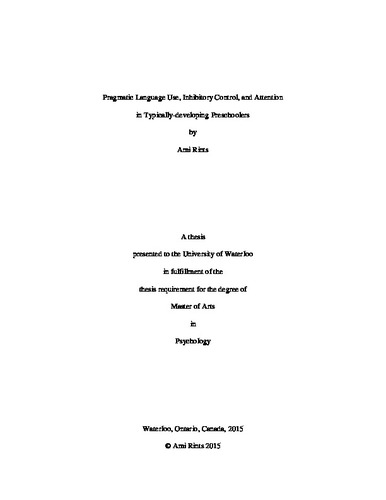 Attention-Deficit/Hyperactivity Disorder (ADHD) is a neurodevelopmental disorder that is characterized by atypical levels of inattention and hyperactivity-impulsivity, and which is estimated to affect approximately 5% of school-aged children worldwide (Polanczyk, de Lima, Horta, Biederman, & Rohde, 2007). A growing body of empirical research has sought to better understand the phenotypic behaviours associated with ADHD, including behaviours which are frequently observed but are not required for a diagnosis of the disorder – including a wide range of socio-communicative behaviours which are often impaired within this population. In addition, recent conceptualizations of inattentive and hyperactive-impulsive behaviours have begun to emphasize the dimensional nature of these traits, with the recognition that these traits may be present to varying degrees within normative populations. Within this context, this study sought to explore the extent to which inattention and hyperactivity-impulsivity were related to the communicative abilities of a sample of typically-developing preschool-aged children. More specifically, this research examined whether inattentive and hyperactive-impulsive traits may mediate the impact of weak inhibitory ability upon both the knowledge and application of appropriate pragmatic behaviours in early development. Thirty-six typically-developing preschoolers and their parents provided the data used in these analyses. Parents completed questionnaires assessing children’s ADHD-related behaviours, while inhibitory control was measured with children using a distraction task. Pragmatic language was assessed via parent report of children’s actual communicative behaviours in their everyday lives (application), and by assessing children’s performance on a task asking them about hypothetical social situations (knowledge). Results indicated that individual differences in children’s inhibitory control predicted both their knowledge and application of appropriate pragmatic language. Hyperactive-impulsive behaviours were found to be a significant mediator of this relationship, but only with respect to children’s ability to effectively apply pragmatic rules in everyday communicative settings. Taken together, these findings suggest that social communication difficulties in some young children may be a downstream effect of hyperactive-impulsive behaviours which arise from poorly developed inhibitory control.