Variations on a Theme of Deep Time: From Geology to Architecture 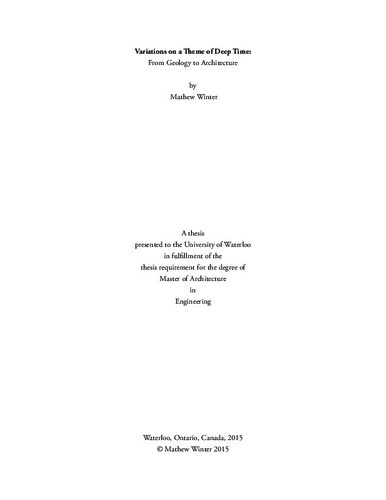 Through the lens of deep time, this thesis draws a comparison between geology and architecture, to create an architecture of simultaneity. Using Henri Bergson’s notion of the present containing all of the past within it, the thesis proposes the earth as being at once a relic, a ruin, and a construction site. Within this earth, there exists the possibility to create an architecture that does not float on the top surface of time, but is embedded both in and across the deep and varying layers of time. It is wholly apparent that architecture exists beyond our personal time frames. It exists as ruins, as monuments to past times, or built into our generation to be sent to the next – surrendering to the intractability of time. Within geological systems in the earth, epochs are embedded as stratigraphy of vast time scales, essential to the structure and depth of the world we experience in the present. Beginning with a fascination of the effects of the past existing in an altered state in the present, a comparison is made between the human, geological, and architectural agencies that are characteristic of the Anthropocene era. The thesis is structured in two main parts: Part I ‘Studies in Time’ and Part II ‘A 20 000 year story’. Part I consists of a series of autonomous explorations existing on various sites and non-sites, using a hybrid of representational methods to investigate and communicate possible links between the senses, the body, history, personal memory, material memory, and earth memory. Part II maintains the same level of autonomy through the fragmented illustration of a geological and historical narrative of the formation of the Niagara River. The 20 000 year story articulates relationships between visible relics and the complex processes that shape them into being. Exploring how the landscape has been transformed by both natural and human intervention, the longevity of formations and of our creations are put into comparative questioning. Describing how these moments are created, embedded, and finally eroded, a link is established between the cycles of creation and destruction with remembering and forgetting. The story concludes with a design study for the currently decommissioned Ontario Power Station Building, proposing a series of operations akin to the transformations observed in the geological and historical narrative.