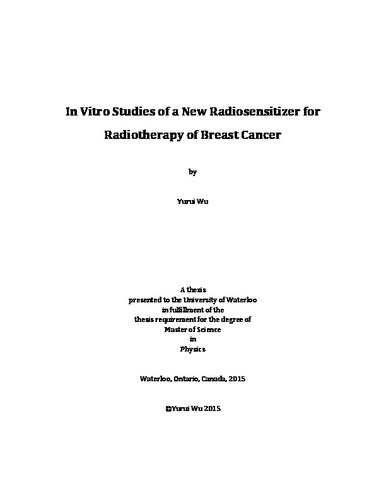 Breast cancer is the most commonly diagnosed cancer among women and is the leading cause of cancer death in both developing and developed areas. Triple-negative breast cancer, one of the subtypes of breast cancer, is generally more aggressive and has fewer treatment options compared with other subtypes, due to the absence of drug-targetable receptors. Radiotherapy delivers ionizing radiation to cancerous areas, leading to DNA damage and cell death. There has been controversy about the molecular mechanism of DNA damage induced by ionizing radiation. According to conventional notions, biological damage by ionizing radiation is primarily induced by the hydroxyl radical, but Lu et al., using femtosecond time-resolved laser spectroscopy, have discovered that the dissociative electron transfer (DET) reaction of the weakly-bound prehydrated electron plays an important role in causing chemical bond and DNA strand breaks. Building on the better understanding of DET reaction mechanisms of prehydrated electron, the mechanism behind the radiosensitizing effect of cisplatin and halopyrimidines has been discovered by our group. However, cisplatin has severe toxicity, and the DET reaction efficiency of halopyrimidines is low. A newly discovered non-platinum-based compound, FMD-Br-DAB, identified through the femtomedicine approach, was tested in this research as a potential radiosensitizer. Our in vitro results have confirmed that FMD-Br-DAB can exert radiosensitizing effects on treated triple-negative breast cancer (MDA-MB-231) cells when combined with radiation. Our results also indicate that FMD-Br-DAB can enhance DNA damage in a dose-dependent manner when combined with radiation.