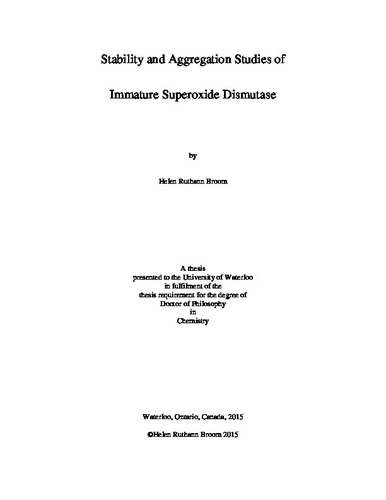 Amyotrophic Lateral Sclerosis is a devastating neurological disease with no known cure. In 1993, a genetic link was established between ALS and mutant forms of Cu, Zn-superoxide dismutase (SOD1), an antioxidant enzyme that catalyzes the dismutation of the damaging free radical superoxide anion (O2-) to hydrogen peroxide (H2O2) and dioxygen (O2). The inheritable form of ALS (fALS) accounts for ~10% of all ALS cases and so SOD1 mutations comprise ~1.5-2% of all ALS cases, but nevertheless represent a major known cause of the disease. Furthermore, the clinical symptoms of fALS and sALS are similar, although fALS patients with SOD1 mutations have an earlier age of disease onset than sALS (by ~10 years). A major hypothesis in the field of ALS research is that mutations decrease the stability and increase the aggregation propensity of SOD1, causing motor neuron degeneration. Attempts to identify relationships between the effects of the mutations and ALS characteristics have shown that these effects are highly complex and not correlated with disease characteristics in a simple way. SOD1 undergoes various in vivo modifications (notably disulfide bond formation and metal binding) and the form of SOD1 that is relevant to ALS toxicity is unknown. Recently, attention has focused on the immature forms of SOD1, which lack metal and/or disulfide bonds, because these forms are more destabilized by ALS-associated mutations compared to the mature, metal-bound, disulfide oxidize (holoSS) form. A powerful approach to uncovering the mechanisms of SOD1 misfolding and aggregation is to investigate the how mutations affect the global and local stability of SOD1 under physiological conditions. Here, the stability of disulfide-oxidized (SS), metal free (apo) SOD1 has been investigated by combining isothermal titration and differential scanning calorimetry techniques (ITC and DSC, respectively) to break down changes in global stability into dimer interface and monomer stability components. First, ITC was used to assess the thermodynamics of dimer dissociation for pWT and 13 ALS-associated mutants and the results were confirmed using size exclusion chromatography (SEC). Together these experiments reveal that all mutations investigated, even those far removed from the interface, promote dissociation. Furthermore, apo SOD1 dissociation is characterized by large ∆Cp, ∆H and ∆S changes, far larger than expected based on theoretical calculations of surface area changes estimated from the crystal structure. This finding suggests that large conformation changes accompany dissociation and that monomeric apo SOD1 is fairly malleable, a finding that suggests dimerization may play an important role in the maturation of SOD1, by preventing the buildup of partially unfolded, aggregation-protein species. Subsequent to these studies, total unfolding (ie. folded dimer to unfolded monomer) for the same set of mutants was characterized using DSC, and the data fit to a 3-state folding mechanism with monomer intermediate. Due to the complexity of this model, numerous DSC experiments for the same mutant were globally fit, with the energetics of the first transition fixed to values obtained by ITC, thus reducing the uncertainty in the fitted parameters that define monomer unfolding. The results from this approach reveal that mutations have variable effects on apoSS monomer stability. In most cases, apoSS monomers are only marginally stable; accordingly, mutations greatly elevate the levels of unfolded protein under physiological conditions. In contrast, two mutations, while decreasing dimer interface stability, actually increase monomer stability. These experiments show that mutations have markedly different effects on the populations of folded and unfolded monomers in vivo and disclose important implications for disease-relevant aggregation. We have also characterized the stability of the most immature form of SOD1 (apoSH SOD1), which lacks both disulfide bonds and metals. This form of the protein is mainly monomeric, with marginal stability that is greatly affected by ALS-associated mutations. Surprisingly however, we find that this form of SOD1 is remarkably resistant to aggregation under physiological-like conditions. Static and dynamic light scattering (SLS and DLS, respectively) as well as analytical ultracentrifugation (AUC) reveal higher-order interactions are present, but of the 12 mutants invested, only one showed evidence of aggregate formation. Increased protein concentrations or the addition of salt promote aggregation of some SOD1 mutants and the mechanism(s) of aggregation have been characterized using light scattering, atomic force microscopy (AFM), and Thioflavin-T (ThT) binding. Under conditions that enhance aggregation, DLS and AFM experiments reveal that some mutants form small fibrils ranging from ~20-100 nm in length, or ~2-100 monomers. Other mutants aggregate less, but the aggregates that do form are longer (greater than 1000 nm). Furthermore, ThT binding experiments suggest that the aggregates contain different degrees of β-structure. Mutations appear to have complex effects on the energy landscape of apoSH SOD1, promoting different aggregation pathways. This complexity may help explain the different disease phenotypes associated with different mutants. By characterizing both folding and aggregation of different forms of immature SOD1, we have employed a powerful approach to untangling the role of toxic aggregation in the syndrome of ALS.