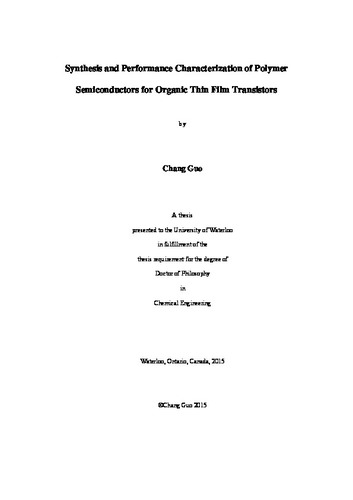 As the most promising semiconductor candidates for organic thin film transistors (OTFTs), donor-acceptor (D-A) type π-conjugated polymers have received much attention in the recent years. Their excellent printability, light weight, mechanical robustness and flexibility are desirable characteristics for low cost and portable electronics. Some issues of polymer semiconductors as such relatively low charge carrier mobility compared to that of silicon as well as the poor stability during manufacturing and device operation in an ambient environment still remain. Although extensive efforts have been made to develop electron acceptor building blocks, which are considered to be critical for achieving high mobility, very few electron acceptors for constructing novel high performance D-A polymers are available. Nowadays most D-A polymers were synthesized using traditional Suzuki or Stille coupling, which use boron- or tin-containing monomers that require extra synthetic steps and are highly toxic in some cases (such as organotin monomers). As an alternative method, the direct (hetero)arylation polymerization (DHAP), provides a new approach to constructing D-A polymers in a cost-effective and environment friendly manner. Certain polymers synthesized by DHAP have demonstrated similar or even better performance compared to the polymers made by other methods. However side reactions and limitations on the types of monomers for DHAP have been reported. To bring the OTFT performance of polymer semiconductors to the next level, new acceptor building blocks and a further study of DHAP need to be exploded. In the first part of this thesis (Chapters 2-4), a novel electron acceptor building block, indigo is chosen, considering its electron deficiency property, highly coplanar geometry and ease of synthesis. Furthermore, indigo and its small molecule derivatives have been demonstrated to be promising semiconductors in OTFTs. However, indigo-containing polymer semiconductors have not been reported yet. In this study, we used 6,6’-indigo as an electron acceptor to successfully develop several n-type electron transport semiconductors. Surprisingly, when 5,5’-indigo was used, the opposite p-type hole transport performance was observed. To the best of our knowledge, this is the first observation that the charge transport polarity could be controlled or switched through different regiochemical connections of a building block. The second part of this thesis (Chapters 5 and 6) focuses on the optimization and development of dipyrrolopyrrole (DPP) based polymers. In Chapter 5, DHAP is used to construct a novel high performance pyrrolo[3,4-c]pyrrole-1,4(2H,5H)-dione (1,4-DPP)-thiazole based polymer. Two synthetic routes are compared and discussed, and the polymer synthesized under optimized DHAP conditions showed better performance than that of a similar polymer obtained by Stille coupling. In Chapter 6, pyrrolo[3,4-c]pyrrole-1,3(2H,5H)-dione (1,3-DPP), an isomer of 1,4-DPP, is developed for constructing polymer semiconductors with promising performance in OTFTs. Systematic studies on the synthesis of these new acceptor building blocks as well as the exploration of DHAP have provided insights into the structure-property relationships of novel D-A polymers and may lead to the discovery of the next generation high mobility polymer semiconductors.