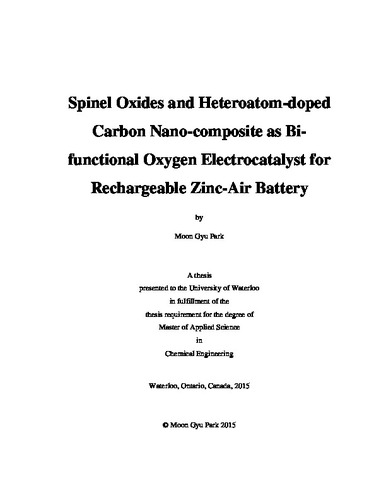 With continued increase in energy demand for high energy-required devices such as portable electronics and electric vehicles, development of innovative energy conversion and storage systems has attracted tremendous attention. Even though lithium-ion battery technology is currently the most developed energy storage technology and employed for multiple applications, their insufficient energy density and critical problem in intrinsic chemistry limit their further development for fulfilling the ultimate requirements. As an attractive alternative technology, metal-air battery has recently captured the spotlight as promising sustainable energy conversion and storage technology. Metal-air batteries with the open architecture provide many attractive characteristics containing environmental benignity, high power and energy densities. In addition, with a wide range of selection in different metals determines different energy capacity and efficiency. Among a various types of metal-air batteries, zinc-air battery system has especially been considered as the most mature technology due to its abundance, low cost, ease handling, and safe operation as well as high energy efficiency. However, some technological challenges of zinc-air batteries such as insufficient cycling durability, low charge/discharge activity and efficiency, and poor rate capability still must be addressed for future commercialization. These main challenges interrupting the development of electrically rechargeable zinc-air batteries are primarily due to very sluggish oxygen reduction and evolution reactions generated during discharge and charge processes on air electrode. The slow oxygen reactions create large overpotentials during both discharge and charge processes, which significantly decrease energy efficiency of zinc-air battery. Accordingly, the use of electrocatalysts in air electrode has been highly required to facilitate the reactions and even propel the zinc-air batteries to practical energy applications. Therefore, it is considerably necessary to develop highly active and durable bi-functional electrocatalysts toward both ORR and OER for the sake of successful commercialization of electrically rechargeable zinc-air batteries. In this point of view, design and synthesis of advanced oxygen electrocatalysts at low cost has been favorably considered. Despite extensive efforts made, however, developing air electrode catalysts with the high activity and the long durability at low cost remain a huge challenge because mostly precious metal-based catalysts such as platinum (Pt) and iridium (Ir) show greatly high activities toward ORR and OER, respectively. However, the use of the materials as electrocatalysts for zinc-air battery is highly challengeable in that they are extremely scarce, expensive, and unstable during the oxygen reactions. Therefore, it is significantly important to develop proper materials which are inexpensive, abundant, and stable during the oxygen reactions, where they are called “non-precious catalysts” primarily composed of transition metals or metal oxides, nano-carbons, and their hybrids. The strong objectives make us focus on the design of a class of novel composite architecture for high-performance electrochemical energy storage, electrically rechargeable zinc-air battery. In this work, the strategy is based on a fast solvation-induced assembly that directly exploits strong hydrophobicity of both cobalt oxide nanocrystals (Co3O4 NCs) and Nitrogen-doped carbon nanotubes (N-CNTs). A two-phase method is exploited to prepare the nearly mono-dispersed, highly crystalline, nano-sized cobalt oxide. The reaction of the two-phase system happens at the interface between the oil (nonpolar) and water (polar) phases and the interface is an exclusive site for both nucleation and growth. N-CNTs were synthesized by a single step chemical vapor deposition technique using either ferrocene as a catalyst and etylenediamine as a carbon source. Simply at first, cobalt oxide NCs and N-CNTs are dispersed in nonpolar solvent (e.g., toluene). Upon addition of polar solvent (e.g., methanol), solvation forces induce the hydrophobic cobalt oxide NCs to assemble around the hydrophobic CNTs, which leads to the formation of cobalt oxide NCs-decorated on the N-CNTs. As an electrochemical catalyst for air electrode, Co3O4 nanoparticle is a material with little ORR activity by itself. However, when it is decorated on Nitrogen-doped carbon nanotubes, their hybrid shows unexpected, surprisingly high performance in ORR that is further enhanced by nitrogen doping of N-CNTs. The Co3O4 NC/N-CNT hybrid exhibits comparable ORR catalytic activity but superior stability to a commercial carbon-supported Pt catalyst in alkaline solutions, thus leading to a novel bi-functional catalyst for ORR. The same hybrid is also highly active for OER, making it a high-performance non-precious metal-based bi-functional catalyst for both ORR and OER. The unusual catalytic activity arises from synergetic coupling effects between Co3O4 and N-CNTs. The full cell electrochemical catalytic activity is evaluated by preparing air electrodes of rechargeable zinc-air batteries utilizing ambient air to emphasize practicality. The galvanodynamic charge and discharge behaviors are superior to Pt/Carbon and N-CNT counterparts particularly at high applied current densities. Electrochemical impedance spectroscopy reveals that Co3O4 NC/N-CNT hybrid electrode results in significantly less internal, solid-electrolyte interface, and charge transfer resistances which lead to highly efficient electrochemical reactions. Superior rechargeability has also been confirmed where virtually no voltage drops are observed over 200 pulse cycles. The practicality of Co3O4 NC/N-CNT hybrid is highlighted by demonstrating comparable discharge voltages and greatly outperforming charge voltages with excellent electrochemical stability than commercial Pt/Carbon catalyst.