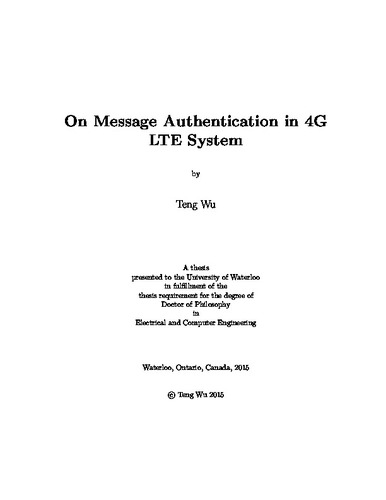 After decades of evolution, the cellular system has become an indispensable part of modern life. Together with the convenience brought by the cellular system, many security issues have arisen. Message integrity protection is one of the urgent problems. The integrity of a message is usually protected by message authentication code (MAC). Forgery attacks are the primary threat to message integrity. By Simon's definition, forgery is twofold. The first is impersonation forgery, in which the opponent can forge a MAC without knowing any message-MAC pairs. The second is substitution forgery, in which the opponent can forge a MAC by knowing certain message-MAC pairs. In the 4G LTE system, MAC is applied not only to RRC control messages and user data, but also to authentication of the identities in the radio network during the authentication and key agreement (AKA) procedure. There is a set of functions used in AKA, which is called A3/A8. Originally, only one cipher suite called MILENAGE followed the definition of A3/A8. Recently, Vodafone has proposed another candidate called TUAK. This thesis first analyzes a MAC algorithm of the 4G LTE system called EIA1. The analysis shows that because of its linear structure, given two valid message-MAC pairs generated by EIA1, attackers can forge up to $2^{32}$ valid MACs by the algorithm called linear forgery attack proposed in this thesis. This thesis also proposes a well-designed scenario, in which attackers can apply the linear forgery attack to the real system. The second work presented in this thesis fixes the gap between the almost XOR universal property and the substitution forgery probability, and assesses the security of EIA1 under different attack models. After the security analysis, an optimized EIA1 using an efficient polynomial evaluation method is proposed. This polynomial evaluation method is analog to the fast Fourier transform. Compared with Horner's rule, which is used in the official implementation of EIA1, this method reduces the number of multiplications over finite field dramatically. The improvement is shown by the experiment results, which suggests that the optimized code is much faster than the official implementation, and the polynomial evaluation method is better than Horner's rule. The third work in this thesis assesses the security of TUAK, and proves TUAK is a secure algorithm set, which means $f_1$, $f_1^*$, and $f_2$ are resistant to forgery attacks, and key recovery attacks; $f_3$ - $f_5$, and $f_5^*$ are resistant to key recovery attacks and collision. A novel technique called multi-output filtering model is proposed in this work in order to study the non-randomness property of TUAK and other cryptographic primitives, such as AES, KASUMI, and PRESENT. A multi-output filtering model consists of a linear feedback shift register (LFSR) and a multi-output filtering function. The contribution of this research is twofold. First, an attack technique under IND-CPA using the multi-output filtering model is proposed. By introducing a distinguishing function, we theoretically determine the success rate of this attack. In particular, we construct a distinguishing function based on the distribution of the linear complexity of component sequences, and apply it on studying TUAK's $f_1$ algorithm, AES, KASUMI and PRESENT. The experiments demonstrate that the success rate of the attack on KASUMI and PRESENT is non-negligible, but $f_1$ and AES are resistant to this attack. Second, this research studies the distribution of the cryptographic properties of component functions of a random primitive in the multi-output filtering model. The experiments show some non-randomness in the distribution of the algebraic degree and nonlinearity for KASUMI. The last work is constructing two MACs. The first MAC called WGIA-128 is a variant of EIA1, and requires the underlying stream cipher to generate uniform distributed key streams. WG-16, a stream cipher with provable security, is a good choice to be the underlying cipher of WGIA-128 because it satisfies the requirement. The second MAC called AMAC is constructed upon APN functions. we propose two different constructions of AMAC, and both of these two constructions have provable security. The probability of substitution forgery attacks against both constructions of AMAC is upper bounded by a negligible value. Compared with EIA1 and EIA3, two message authentication codes used in the 4G LTE system, both constructions of AMAC are slower than EIA3, but much faster than EIA1. Moreover, both constructions of AMAC are resistant to cycling and linear forgery attacks, which can be applied to both EIA1 and EIA3.