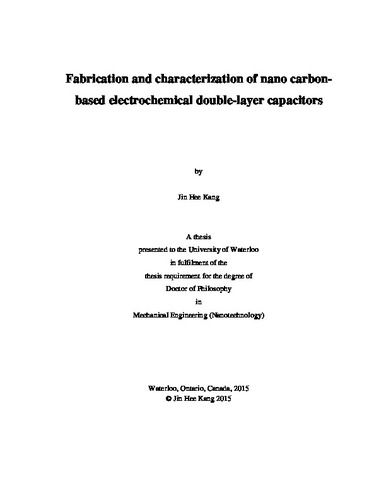 Porous electrode is a key component in electrochemical double layer capacitors (EDLCs), also called supercapacitors, which provides effective charge storage sites and ion transport channels along the electric double-layer interface between a solid electrode surface and liquid electrolyte. In particular, the micro-structure of an electrode is extremely important to optimize the ion’s transport channel and subsequently increasing the ion storage capacity on porous electrodes. This research focuses on three types of porous carbon materials, activated carbon (AC), graphene and single-walled carbon nanotube (SWCNT), with varying surface area and internal porosity as electrode materials. Depending on the type of carbon materials, three different fabrication methods, cast-coating, electrophotretic deposition (EPD) and vacuum filtration deposition, were developed to exploit the unique properties of electrodes. Their structural, electrochemical, thermodynamic properties were characterized, and the temperature/frequency-dependent capacitive and resistive behaviors were correlated to the microstructures, BET surface area, pore size and pore size distribution (PSD) of the electrodes. Under various operating temperatures between -30 °C and 60 °C and frequency operations, these electrochemical parameters were quantified using cyclic voltammetry (CV), constant current charging/discharging (CCD) measurements and electrochemical impedance spectroscopy (EIS). The differences in their temperature/frequency-dependent characteristics, including their current response to high scan rates, capacitance retention, resistance variation, and degradation of energy and power densities, were addressed by investigating ion kinetics and transport into the micro-, or meso-pores of the electrodes. An equivalent circuit model for an EDLC device was proposed through analyzing the EIS measurements. This model was developed based on the Grahame theory, while the effects of charge diffusion and the ion adsorption at the double-layer interface and bulk media were investigated. This circuit model, upon its validation against the EIS data, was successfully applied to characterize practical EDLC devices. Experimental results were obtained from different EDLC cells consisting of activated carbon-based electrodes and two distinct electrolytes, aqueous (H2SO4) and organic (Et4NBF4/PC). The model predicted the useful parameters (such as charge transfer, diffusion, adsorption and bulk media impedance) which help interpret electrochemical processes at the electrode/electrolyte interface. The quantitative dependence of impedance on the applied electrode potential was analyzed for the two electrolytes during charging/discharging, and its correlation with the internal resistance (referred ESR) was derived. Their temperature-dependent electrochemical properties were also investigated using a specified characterization procedure, and the capacitance, internal resistance and energy/power densities of the two capacitors were quantified. The temperature dependency of their impedances was analyzed through simulations of the EIS data by the proposed equivalent circuit model. The simulated impedances were then utilized to address the performance discrepancies between the two electrolytes.