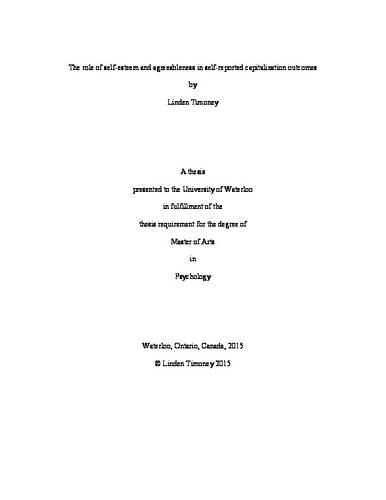 Variation in self-esteem and agreeableness may determine who benefits most from capitalization. The present study investigated the role of self-esteem and agreeableness in capitalization processes in romantic relationships. Capitalization occurs when people share personal positive news with others, and it has well-established affective benefits. In the present study, however, I expected that people with lower self-esteem (LSEs) would not derive the same affective benefits from capitalizing as would their higher self-esteem peers (HSEs). Participants reported on the most recent positive event they had disclosed to their romantic partner, and their mood prior to and following disclosure. Relative to HSEs, LSEs reported disclosing less enthusiastically and openly, feeling greater concern about their partner’s potential response, enjoying the interaction less, and perceiving overall worse responding from their partners. Despite these less positive self-reported expectations for, and perceptions of, the interaction, LSEs’ self-reported mood improved following disclosure. Controlling for self-reported typical mood, LSEs’ self-reported positive mood after capitalization did not differ from HSEs’. These findings suggest that LSEs benefit from sharing good news with romantic partners, despite having some reservations about the process.