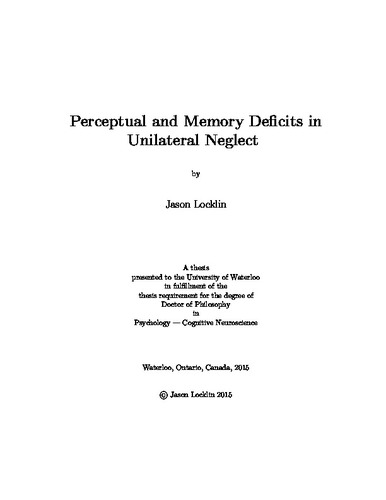 Unilateral neglect is a disorder in which patients behave as if the left half of space has ceased to exist. The disorder typically arises from right hemisphere brain damage involving the inferior parietal and superior temporal cortices. Classic models of neglect have suggested that the disorder represents impaired attentional functioning. More recently, research has suggested that the heterogeneous symptoms of neglect can not be fully explained by attentional deficits alone. This thesis first examined performance on both visual working memory and attention tasks in patients with right brain damage, some of whom presented with neglect. Results showed severe deficits in both domains. Next, prism adaptation, a treatment long understood to improve attention in neglect, was used to examine whether the technique could improve performance in domains not specifically related to attention. Results showed that prisms failed to meaningfully improve severe deficits in time perception and spatial working memory. Such deficits outside spatial attention may be the result of damage to perceptual systems. The final experimental chapter examined the potential for saccadic adaptation, an analogue of prism adaptation previously shown to induce some perceptual change, to influence both perception and action in ways relevant to neglect. Here, healthy individuals performed the classic saccadic adaptation paradigm, with performance on a line bisection and landmark task used as indices of action and perception respectively. The task was not found to measurably influence either domain. Overall, the thesis supports recent research that claims that neglect involves independent deficits, involving more than attention. Specifically, it provides evidence that working memory and perceptual deficits are not strongly coupled to spatial attention.