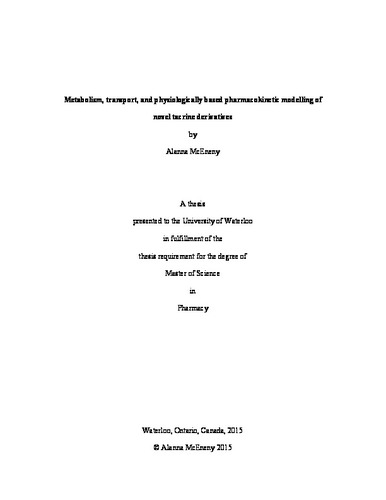 Alzheimer’s disease (AD) is the most prevalent form of dementia affecting the elderly population, and its burden is rapidly growing both in Canada and worldwide. As a result, there is a substantial need for more effective treatments. The first drug that was approved for the management of AD symptoms was tacrine, a dual cholinesterase inhibitor. However, tacrine has since been discontinued after signs of hepatotoxicity were observed in a considerable proportion of patients. This toxicity has been linked to certain metabolites of tacrine formed by oxidation via the hepatic enzyme CYP1A2. Despite this issue, tacrine has remained a popular scaffold for the design of novel anti-Alzheimer’s agents. While tacrine is an example of the “one drug, one target” approach, a popular strategy involves functionalizing tacrine into a multi-targeted compound to target several pathways in the complex pathology of AD. In this regard, a library of tacrine derivatives was developed that exhibited both potent cholinesterase inhibition and the ability to inhibit the formation of the characteristic beta-amyloid plaques. Out of 25 starting compounds, nine compounds were examined further using in vitro and in silico techniques to investigate binding interactions with CYP1A2 and CYP3A4 (to assess potential for hepatotoxicity) and P-gp (to predict central nervous system permeability). Three of the remaining nine compounds displayed the desired properties and further experiments were conducted with these compounds to determine metabolic clearance. These results were incorporated into a physiologically based pharmacokinetic model that was used to predict the dose needed to reach target brain concentrations in a preclinical study.