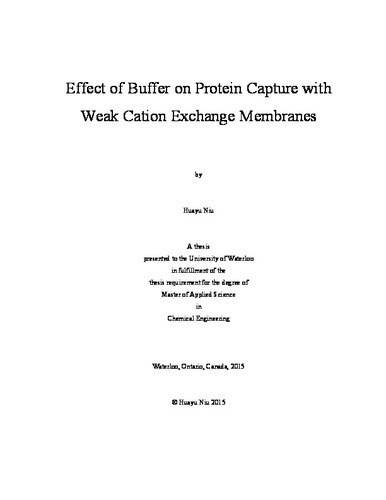 Ion exchange membrane chromatography represents a potential alternative to conventional Protein A or resin chromatography for protein capture of monoclonal antibodies (mAbs), due to its high throughput and low operation cost. Buffer optimization is critical for understanding the performance of ion exchange membrane chromatography. This project investigates the effect of buffer on membrane properties and protein capture with a weak cation exchange macroporous hydrogel membrane, Natrix C. The weak cation exchange membrane is comprised of a porous polyacrylate hydrogel and a polyolefin matrix backbone, displaying different properties according to buffer conditions. Two types of buffer with different ion characteristics, phosphate citrate buffer (effective pH: 2~8) and acetate buffer (effective pH: 4~5), were evaluated. In the first part, the effect of buffer on the membrane swelling behavior was investigated, and membrane surface morphology was observed by Environmental Scanning Electron Microscopy (ESEM). Significant influence of pH and ionic strength on membrane swelling was confirmed (ANOVA; 95%) for phosphate citrate and acetate buffer, while no significant difference was observed between the two buffer types. Surface morphology of Natrix C visualized by ESEM indicated the significance of the hydrogel component. The second part focused on the effect of buffer on static protein adsorption by comparing two model proteins, lysozyme and immunoglobulin G (IgG), through protein adsorption isotherms and adsorption models. The two-parameter Langmuir model indicated different maximum adsorption capacity (qmax) and protein membrane affinity (K) according to protein type and buffer conditions. The adsorption isotherm for lysozyme was dominated by the strong protein charge, thus the buffer effect was negligible. As for IgG, the moderate protein charge led to pronounced buffer effect, where the estimated qmax and K were significantly different between the two buffers. The difference in the estimated K may result from the effect of ion composition on surface charge distribution of protein, while the estimated qmax may reflect the effect of ionic strength on accessibility of binding sites and competitive binding between salt and protein. Protein membrane interactions were studied through the SMA adsorption model on IgG adsorption isotherms, by analyzing the difference of estimated parameters, the characteristic charge (ν), the equilibrium constant (Ka), and the steric factor (σ), between the two buffers. The influence of ion valence was proposed, that multivalent anions in phosphate citrate buffer may adsorb onto the protein surface thus affect its surface charge distribution. In the last part, the effect of buffer on dynamic protein adsorption, i.e. feed protein concentration, pH and type of binding buffer, was analyzed by the breakthrough curves and dynamic binding capacity estimates at 10% breakthrough (DBC10%). Distinct breakthrough curves were observed for lysozyme according to pH, feed concentration and buffer type, indicating different degrees of mass transport limitations. Significant effect of pH and buffer type, and moderate effect of feed concentration on DBC10% were observed for lysozyme with Natrix C (ANOVA; 95%). Dynamic binding of IgG was strongly dependent on buffer type. Higher DBC10% than lysozyme was achieved in acetate buffer, while dynamic binding was inoperable with the phosphate citrate buffer. In general, Natrix C membrane is a promising alternative for protein capture, with its high affinity and high binding capacity as presented in this study. While its performance is significantly influenced by buffer, establishing appropriate procedures for buffer optimization according to protein characteristics is essential for the development of ion exchange membrane chromatography.