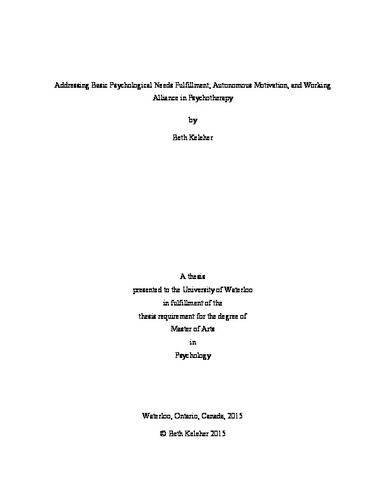 According to many sources (e.g., Horvath & Symonds, 1991; Martin, Garske, & Davis, 2000; Safran & Muran, 2006; Wampold et al., 1997; Zuroff & Blatt, 2006), common factors found in all psychological treatments are more powerful predictors of treatment efficacy than treatment techniques espoused by any one individual therapy method. In order to address our understanding of how diverse forms of psychotherapy lead to positive outcomes, several authors have investigated the possible contribution of self-determination theory (SDT) variables to therapeutic change (e.g., Zuroff et al, 2007; Zuroff, Koestner, Moskowitz, McBride, & Bagby, 2012). In particular, the SDT constructs of autonomous and controlled motivation, autonomy support, and basic psychological needs have been proposed as factors that could influence psychotherapy outcome (Ryan & Deci, 2008; Deci & Ryan, 2008). Few research studies have examined the relationship between basic psychological needs, working alliance, and therapy persistence. Therefore, the goal of the interview study was to determine whether client ratings of the fulfillment of their basic needs during psychotherapy predicted early termination of therapy. While results in Study 1 were not significant, the trend indicated that a better-powered examination of the variables might result in significant findings. Accordingly, results from Study 2 indicated that those clients who unilaterally end therapy early without the agreement of their therapist tended to have significantly lower ratings of basic psychological needs fulfillment within psychotherapy than their planned-ender counterparts. Furthermore, while previous research has provided a window into the clinical value of autonomous motivation and autonomy support in psychotherapy, little is known about the state-related intricacies of motivation and working alliance in psychotherapy as they vary from day-to-day and week-to-week. In order to address this area of inquiry, and in lieu of the resources to conduct a psychotherapy treatment study, we developed an intervention with an analogue population: problem procrastinators. Results revealed that participants in both the individual and group conditions experienced a significant increase in autonomous and controlled motivation for academics overall over the course of the intervention. However, this increase in motivation was not dependent on assigned condition. Furthermore, controlled motivation for daily proximal tasks increased significantly over the course of the intervention, while autonomous motivation for proximal tasks demonstrated a similar, although not significant, trend. Again, these findings did not differ by phase of study (baseline or intervention) or condition assignment. Future research should examine these variables in a psychotherapy-receiving treatment population, prospectively.