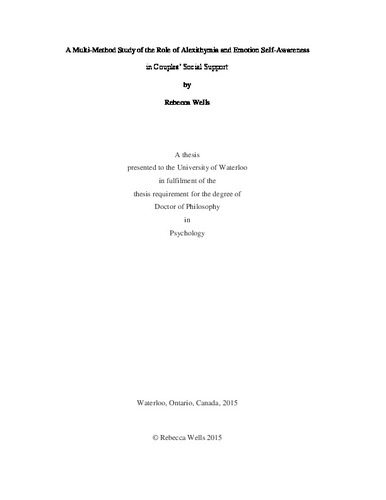 The overarching goal of the present study was to examine associations between measures of alexithymia (i.e., difficulty identify and describing one’s feelings) and perceptions of social support receipt and provision in a romantic context. The sample consisted of 69 heterosexual couples in long-term committed relationships. Both partners completed self-report and performance-based measures of alexithymia as well as self-report measures of received, provided and expected social support from their romantic partners. The self-report (TAS-20) and performance-based (CEAS) alexithymia measures were weakly correlated and did not demonstrate similar patterns in association with social support variables. TAS-20 scores were associated with self- and partner-reported received and provided supports, as well as self-reported satisfaction with support, but these associations were not replicated with the CEAS. Partners’ scores on the CEAS interacted to predict expected support in a given interaction such that individuals high in emotion self-awareness reported expecting less emotional support from partners who were low in emotion self-awareness than from partners high in emotion self-awareness. There was a similar trend for TAS-20 scores. Overall, the results suggest that the TAS-20 is better conceptualized as a measure of alexithymic self-schema rather than of skill deficits and that perceived deficits in emotional functioning are associated with perceptions of social support. The results also have implications for understanding the role of alexithymia in social support and suggest that it warrants attention in couples’ therapy focused on support related issues. Future research should examine how an alexithymic self-schema develops and investigate the role of motivation in emotion self-awareness.

Rebecca Wells (2015). A Multi-Method Study of the Role of Alexithymia and Emotion Self-Awareness in Couples’ Social Support. UWSpace. http://hdl.handle.net/10012/9577