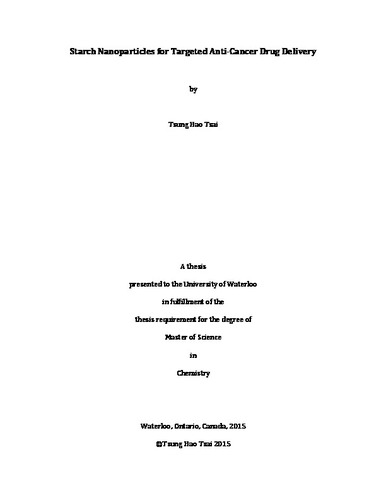 In the field of anti-cancer drug delivery, nanoparticles have become an active topic of research. Nanoparticles made of biodegradable materials such as polylactic acid, proteins, and polysaccharides have been reported for delivery applications. Among all the studies, polysaccharide-based systems are gaining increasing attention due to their low toxicity, great abundance, and high biocompatibility. However, relatively few starch-based nanoparticle delivery systems have been reported. In addition, most previous work employed only small-scale lab synthesized starch nanoparticles, which were made under various condition using different crosslinking agents. Therefore, they may have large batch- to-batch variation. This thesis reports a starch nanoparticle delivery system designed to target cancer cells. A commercially available starch nanoparticle material named EcoSphereTM was modified with aptamers to achieve active targeting. Our EcoSphereTM nanoparticles (ENP) were made in very large scale and its modification scheme is divided into initial oxidation and subsequent aptamer conjugation. ENPs were first subject to TEMPO-mediated oxidation to selectively oxidize its C6 hydroxyl group into carboxyl group. Partially oxidized ENPs were confirmed and characterized through spectroscopic measurements, including NMR and dynamic light scattering. ENPs of various oxidation levels (1%, 2%, 5%, 10%, and 20%) were then tested for conjugation efficiency using dye molecules and control DNA, and only the 20% oxidized ENPs show minor DNA conjugation. DNA coupling procedure was then optimized and aptamer conjugation efficiency was improved to >80% by reacting at elevated temperatures and in slightly acidic environment. The fully modified ENPs were then subject to two cellular assays to evaluate cellular internalization and vehicle selectivity. Aptamer-modified ENPs show clear internalization and dye-modified ENPs also shows significant internalization. Vehicle selectivity was demonstrated through preferential uptake of AS1411-modified ENPs over sgc8-modified ENPs, where sgc8 is a control aptamer that does not target the HeLa cells.