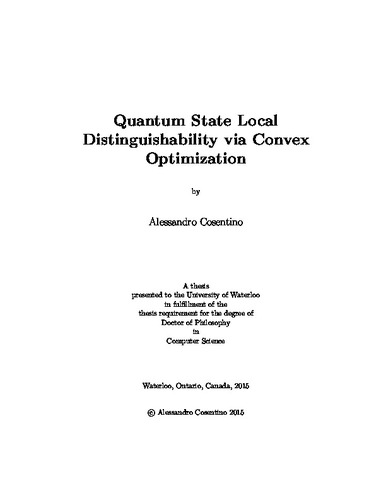 Entanglement and nonlocality play a fundamental role in quantum computing. To understand the interplay between these phenomena, researchers have considered the model of local operations and classical communication, or LOCC for short, which is a restricted subset of all possible operations that can be performed on a multipartite quantum system. The task of distinguishing states from a set that is known a priori to all parties is one of the most basic problems among those used to test the power of LOCC protocols, and it has direct applications to quantum data hiding, secret sharing and quantum channel capacity. The focus of this thesis is on state distinguishability problems for classes of quantum operations that are more powerful than LOCC, yet more restricted than global operations, namely the classes of separable and positive-partial-transpose (PPT) measurements. We build a framework based on convex optimization (on cone programming, in particular) to study such problems. Compared to previous approaches to the problem, the method described in this thesis provides precise numerical bounds and quantitative analytic results. By combining the duality theory of cone programming with the channel-state duality, we also establish a novel connection between the state distinguishability problem and the study of positive linear maps, which is a topic of independent interest in quantum information theory. We apply our framework to several questions that were left open in previous works regarding the distinguishability of maximally entangled states and unextendable product sets. First, we exhibit small sets of orthogonal maximally entangled states in that are not perfectly distinguishable by LOCC. As a consequence of this, we show a gap between the power of PPT and separable measurements for the task of distinguishing sets consisting only of maximally entangled states. Furthermore, we prove tight bounds on the entanglement cost that is necessary to distinguish any sets of Bell states, thus showing that quantum teleportation is optimal for this task. Finally, we provide an easily checkable characterization of when an unextendable product set is perfectly discriminated by separable measurements, along with the first known example of an unextendable product set that cannot be perfectly discriminated by separable measurements.