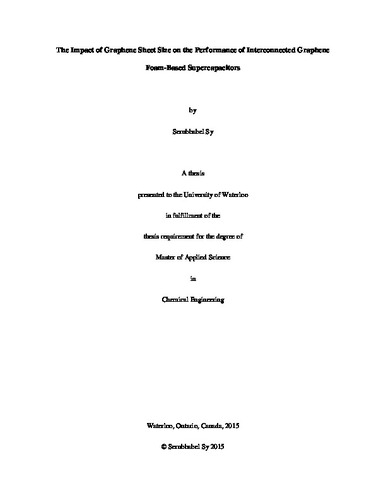 The increasing demand for energy and growing concerns of propagating greenhouse emissions has directed many investments towards the furtherance of benign energy storage commercialization. Unfortunately, batteries continue to maintain their dominance on the markets of vehicles, and portable electronics. Supercapacitors, however, have actually recently started carving out market shares in these two areas. Supercapacitors can be found complementing existing technology, and in some cases replacing battery powered devices. The major of advantage of utilizing oil as the primary energy source lies in its ability to conjure large amounts of energy in short amounts of time. This is another niche market that supercapacitors can establish for itself: supplying moderate energy storage but capable of large bursts when necessary. A derivative of carbon called graphene has also been at the forefront of many research fields. The pace of graphene research has escalated quickly within the past decade, especially after Geim and Novoselov introduced the “scotch-tape method” of obtaining monolayer graphene. Graphene is a two-dimensional sp2 honeycomb allotrope of carbon that exhibit amazing optical, electrical, thermal, electrical and mechanical properties. Although many scientists have discovered many creative ways of producing graphene-based products, some fundamental properties remain a mystery. Herein, this proposed work was directed at affirming the relationship between the lateral graphene sheet size and its effect on graphene foam-based supercapacitors. For this, two graphene oxide (GO) materials produced from two different graphite precursors, were deposited into porous nickel and then chemically reduced in-situ. Subsequently, these electrodes were lyophilized and fabricated into a coin cell supercapacitor. These foam devices prepared with smaller planar graphene sheets exhibited 3-16% higher gravimetric capacitance than those prepared with larger sheets. These differences in performance was likely resulted from the higher surface area, lower ion transport resistance and improved ionic wettability inherent to graphene with smaller sheets. However, impedance characterizations has shown that larger graphene sheets possess higher electrical conductivity than that of smaller graphene sheets. It is believed this work will provide some guidance when tailoring the graphene planar sheet size depending on the situation and application. This work may also find use in other energy applications such as electrolyte development, fuel cells and batteries.